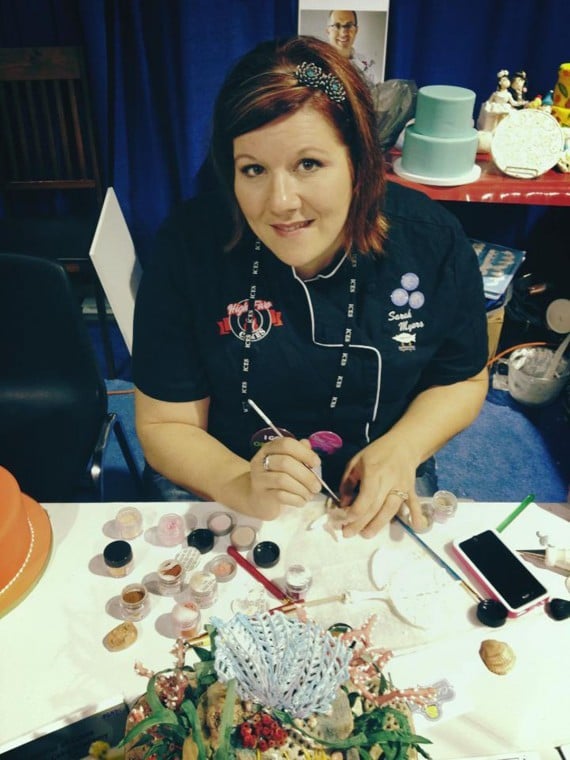 ABOVE: Sarah Myers, local cake artist and owner of High Five Cakes, was recently chosen to participate in a unique tribute to innovative filmmaker Tim Burton. Myers, one of 100 bakers to participate in the project, chose to design a food sculpture based upon Adam Maitland, a character from the 1988 horror-comedy film “Beetlejuice.” 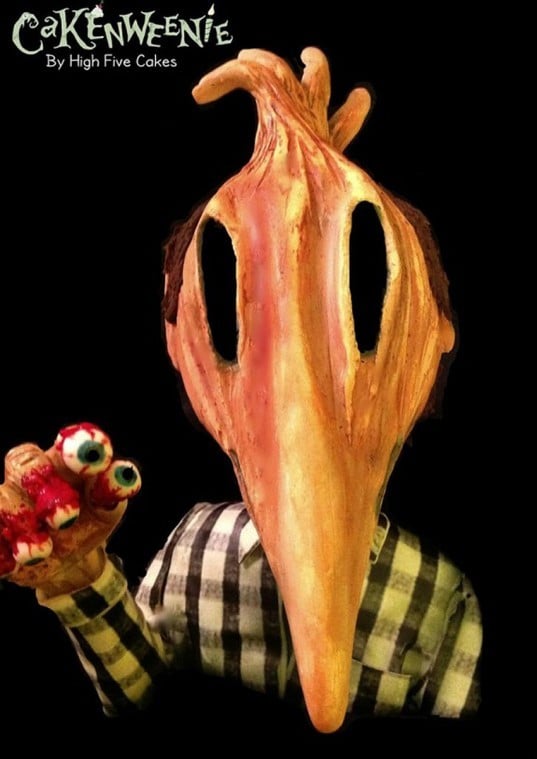 AT LEFT: Last month, Sarah Myers, of Waverly, designed this edible sculpture based upon the “Beetlejuice” character Adam Maitland, as part of “Cakenweenie,” a project that paid tribute to filmmaker Tim Burton, in celebration of his 55th birthday. The four foot tall sculpture was made using modeling chocolate, gum paste and fondant.

ABOVE: Sarah Myers, local cake artist and owner of High Five Cakes, was recently chosen to participate in a unique tribute to innovative filmmaker Tim Burton. Myers, one of 100 bakers to participate in the project, chose to design a food sculpture based upon Adam Maitland, a character from the 1988 horror-comedy film “Beetlejuice.”

AT LEFT: Last month, Sarah Myers, of Waverly, designed this edible sculpture based upon the “Beetlejuice” character Adam Maitland, as part of “Cakenweenie,” a project that paid tribute to filmmaker Tim Burton, in celebration of his 55th birthday. The four foot tall sculpture was made using modeling chocolate, gum paste and fondant.

When Tracey Rothwell, of Little Cherry Cake Company, in Britain, contacted Myers and offered her the opportunity to participate in the project, entitled “Cakenweenie,” Myers didn’t hesitate to join in on the fun.

“I love Tim Burton, so of course I was thrilled to do it,” said Myers, of Waverly. “Burton pushes the envelope by letting his imagination run wild. I love all things whimsical, weird and gory. I try to put an original spin on the norm.”

According to Myers, the “Cakenweenie” project has been five months in the making.

“We decided which characters we were interested in creating and planned our grand reveal. Everything was top-secret for months,” said Myers. “The day before Burton’s birthday, we all gave teasers, including posting Tim Burton quotes, and we flooded social media with pictures on his birthday.”

When it came time to choose the subject of her tasty tribute, Myers, a self-described “die-hard Beetlejuice fan,” opted to create Adam Maitland, a ghostly character portrayed by Alec Baldwin in the 1988 horror-comedy film.

“I wasn’t sure how long the sculpture had to last, so I made my design using modeling chocolate, gum paste and fondant,” said Myers. “Chocolate lasts a lot longer than cake will.”

Myers says she chose her “creepy and weird” design “because of the eyeballs.”

“At one point in the film, Maitland is transformed into a creature with bloody eyeballs for fingers,” said Myers. “The hardest part about the project is that Tim Burton characters are so unique and iconic. Everyone has seen them, so there’s no room for error. If my character was missing a finger or the eyes were misplaced, it would be obvious. It took a lot of pausing the movie and keeping several Google images up in front of me to make sure I got all sides right. When you’re recreating characters, you have to nail it!”

For Myers, participating in “Cakenweenie” gave her the chance to veer away from the Betty Crocker image of being a baker, leaning instead toward the darker side of cake art.

“If I had to pick a Tim Burton character that I identify with, I’d have to say Edward Scissorhands,” said Myers. “You cannot tell what he can do with those hands until you see him in action. When I tell people I’m a cake artist, they picture Betty Crocker, but they don’t realize the wild and wonderful, and sometimes creepy things I can make.”

When photos of the 100 confectionary creations were uploaded to Cakenweenie.com, it didn’t take long before the project “went viral,” making its way to a variety of blogs, newspapers and magazines, worldwide.

“When you are involved in a project, you never know if it will get media attention, but this thing has really blown up,” said Myers. “MTV Geek featured a few of us, and the Columbus Dispatch did a story about my creation. That was phenomenally amazing. Name any nerd or geek blog, and our project is there!”

According to Myers, the best part of participating in the project was that it could all be completed in the comfort of her home.

“There really wasn’t a huge commitment required, except to make the piece and take pictures of the progress of our work,” said Myers. “It was great to be able to do such a huge project without having the worry of traveling or leaving home.”

Myers’ four foot tall Maitland creation took four hours to complete. Since starting her cake company “on a whim” three years ago, Myers has watched her business blossom, leading to travel opportunities and the chance to regularly compete across the country in timed cake-decorating competitions.

“If you have the chance to do what you want to do, you should do it,” said Myers. “When I think of how my business has grown over the past three years, it is crazy! I’m setting goals and going after them, and I’m so proud. I’m so stoked about the outcome of this whole project, and what put the icing on the cake was that Tim Burton saw our work, loved it and gave us a shout out. That was so awesome! It was one heck of a tribute, and I’m so glad I had the chance to be a part of it.”