Sign Up
Log In
There are no services available.
You are the owner of this article.
Edit Article Add New Article
Home
News
Sports
Obituaries
e-Editions
Community
Reader Services
Classifieds
Travel Guide
Open for Business
1 of 2 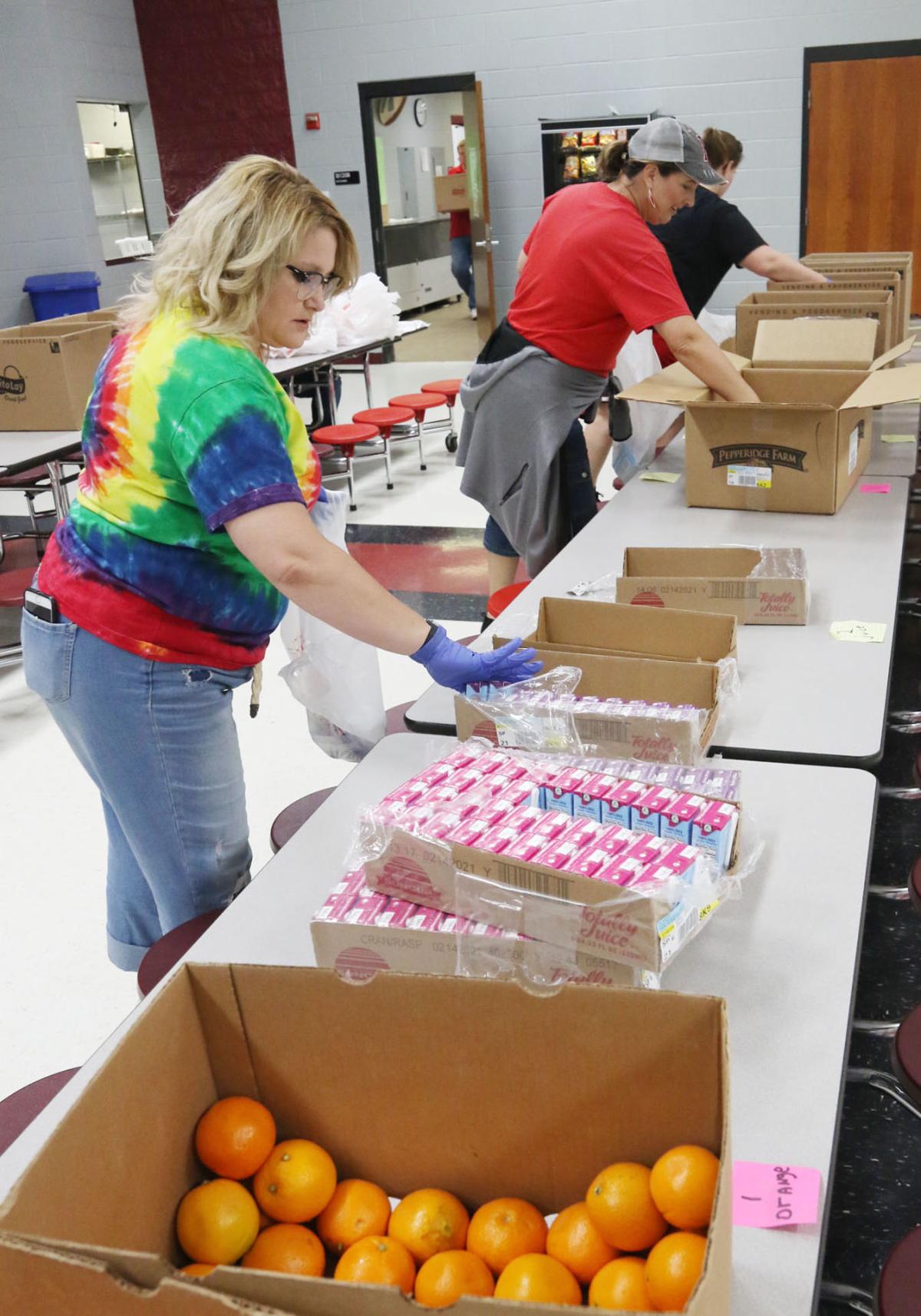 Staff members spread out six feet apart as they walk along cafeteria tables at Piketon High School to pack meals for students. 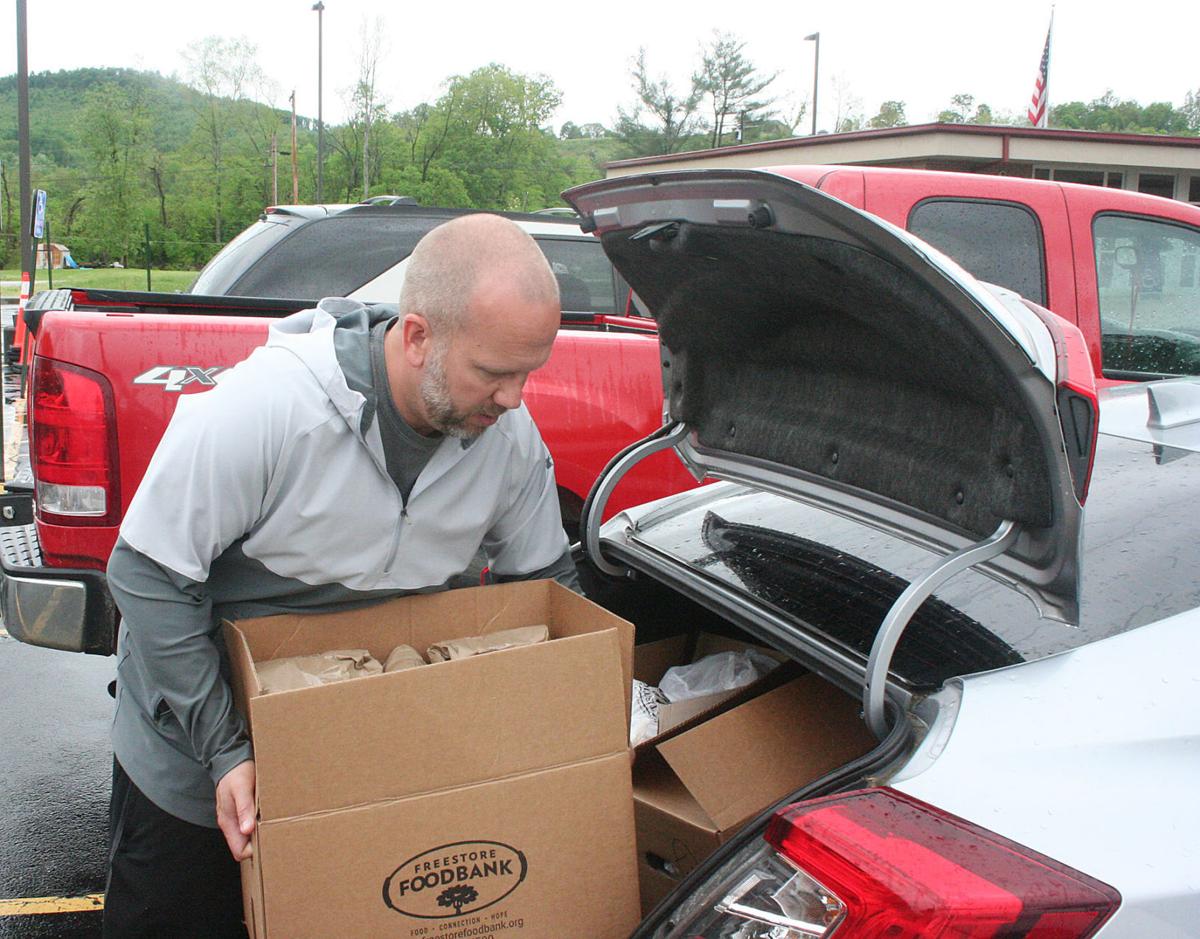 Jason Mantell, Scioto Valley Local Schools Director of Operation, loads boxes of food in the back of his car in the parking lot of Jasper Elementary prior to delivering them on Tuesday morning.

Staff members spread out six feet apart as they walk along cafeteria tables at Piketon High School to pack meals for students.

Jason Mantell, Scioto Valley Local Schools Director of Operation, loads boxes of food in the back of his car in the parking lot of Jasper Elementary prior to delivering them on Tuesday morning.

When schools across the state of Ohio closed in mid-March due to the threat of COVID-19, many students who rely on school-provided breakfast and lunch faced the prospect of being hungry during the stay-at-home orders.

At Scioto Valley Local Schools in Piketon and Jasper, it has been a team effort to make sure that students in need have plenty of options for food. The program just completed its final week and will pass the torch to other area food programs for the summer months.

On Tuesdays and Fridays, school staff members have been working together in both locations to pack lunches for students in need. The staff members come in at 9 a.m. on those days to assemble the meals and the buses/drivers leave at 10:30 a.m to go around and deliver three days worth of food.

Jason Mantell, director of operations of the Scioto Valley Local School District, has been coordinating the effort at both schools, but he has allowed Gary Ferguson to handle much of the day-to-day operation at Piketon High School.

“When the stay-at-home order came, we had to figure out how to best serve our students. What we’ve done is create two main stops — one at the high school and one at Jasper,” said Mantell. “We have some satellite spots. My wife and I go to the Elm Grove Fire Department. We’ve been able to use fire departments and buildings, which has been great. It is a community effort.”

Mantell is thrilled with how many individuals stepped up to help with the endeavor.

“I don’t want to start naming people because I don’t want to leave anyone out. I will name two people in particular: Gary Ferguson is overseeing the day-to-day at the high school, while Kathy Shepherd, a cook, has overseen the operation here at Jasper,” said Mantell.

“Those two are wonderful employees. The program has been very successful. We’ve been happy with the results and had a lot of positives. We are still able to interact in some degree in a safe manner with people in the community.”

Mantell said some of the foods they have provided are shelf stable, and they have also been able to continue the Power Pack feeding program through the Steven Hunter Hope Fund.

“The Steven Hunter Foundation has been great. That family has been able to provide so much food. It is another example of local people taking care of others in the community,” said Mantell, talking about the Portsmouth-based foundation that provides weekend food for more than 1,300 children in 20 public school districts in Scioto, Adams and Pike County.

“It has been a whole group effort at our district, and I appreciate that. It has been nice. We have had teachers, custodians, cooks, administrators, aides and support staff all give us help. Our bus drivers are doing some remote deliveries as well as drop-offs.”

Jessica Brust, Jasper Elementary assistant principal, coordinated the logistics of compiling a list of those in need by using an answering service to help with the process.

Families could call and leave a message. Brust said they asked the family to leave their name and the number of children in the home.

“We didn’t mind if they had babies or toddlers. We wanted to make sure every child in the home got food whether they were a Piketon student or not,” said Brust.

“They were able to chose their pickup place, which was a great thing, and includes the two schools, plus Elm Grove and Camp Creek. If they didn’t have a way to get here, then we would deliver. Each day we have two teachers who deliver, and it takes them about two-and-a-half hours.”

Brust said roughly 150 to 175 packages of food are collected from Jasper Elementary. The rest is distributed by deliveries.

“With our answering service, they can adjust their pickup location or make changes, which has helped keep days very organized. If families needed food, they came to us,” said Brust.

“Once we had our list compiled, we reached out to some families who maybe didn’t see the answering service number. We did an all-call, put it on our website and Facebook. But we still had some people we were concerned about, so we wanted to make sure they had the number. Now I just check the messages on our pickup days to see if anyone needs to be added. The need has stayed very constant since our big push started. Honestly, families worry so much more about food than the work side of life. We are glad to help relieve some of that burden for them.”

Brust said the response has been outstanding. It has been well received by the community.

“People have been so appreciative. A big part of our population has trouble with transportation. By having the buses out and by them having the option for us to deliver, it has helped take the weight off their chest,” said Brust.

“We have had a lot of staff members who have come in and volunteered. They truly do worry about the kids. Some of the kids rely on our food here. We wanted to make sure that they had it. We honestly couldn’t have done it without all of the packers. We pack all of those meals in the morning before we distribute them because we are trying to limit the number of times for people to come and follow social distancing rules.”

At Piketon High School, Gary Ferguson has taken charge of getting the food each week, taking over for Bev Legg, who retired.

“When they closed school, we decided to start feeding the kids,” explained Ferguson. “The majority of the food comes from GFS (Gordon Food Services) from Cincinnati, which is where the majority of our food comes from during the school year. We got a lot of our fresh produce from Ritchie’s Marketplace.”

We try to give them enough for the days in between our deliveries,” explained Ferguson.

“We’ve had a few challenges getting some of the food we wanted in the beginning. The supplier ramped it up, so we haven’t had too much trouble in the last few weeks. Whenever they didn’t have food items, we would substitute other food items. Overall, it has gone smoothly.”

Some food was placed in front of the Piketon High School building for families to pick up. The rest was delivered on two different bus routes. One bus visited three apartment complexes in the Piketon area, while the other headed to Wakefield.

“It all seems to come together well every time we do it,” said Ferguson. “Everybody comes together to get the job done.”

Kristy Moore, a seventh and eighth-grade language arts teacher, has helped with packing at the high school throughout the closure. Moore explained the process, saying the volunteers arrived a little before 9 a.m. and split into two groups — one packing the breakfasts and the other packing the lunches. Then they combined the breakfasts and lunches into one package for each student in need.

The bus driver provideed the transportation for the food to be delivered to various stops by the teachers.

“Mike Cuckler is our bus driver, and there are four of us who ride with him on the bus. We have certain stops that we make on our route. We stop at Dawson’s Trailer Park and the Wakefield-Mound area,” said Moore. “We see the same people every week. It has been really nice. We’ve gotten to know some of the kids and some of the parents on that route.”

Moore said some of the families on the route are extremely thankful for the deliveries.

“The first time we went out, some were a little reserved. Now they’ve become used to us. They will be waiting for us to get there today. We have one lady who watches her grandkids, so she waits outside every week,” said Moore. “They are always very appreciative, kind and polite. They are very grateful for what they are getting.”

While providing food is the largest mission of the effort, there are other aspects of importance for those who helped as a part of the team.

“It feels good to be a part of it, but I also feel like it is my responsibility. These are my kids. I may not be working in a traditional classroom setting right now, but at least this lets me touch base with some of my kids,” said Moore.

“I have about three students I see on the route. It is nice to see their faces and make sure they are doing all right. We even have pets on the route that are excited to see us.”

The situation has allowed different staff members to work together as well.

“It has given me an opportunity to work with staff members that I didn’t normally get to work with day to day,” said Moore. “I’m working with custodians and kitchen staff, not just the teaching staff. It has been nice. And I haven’t ridden the bus in years until now.”

Other types of news

Do you have another type of event or announcement you'd like us to know about? Click on the button and go to a form to let us know what's going on.