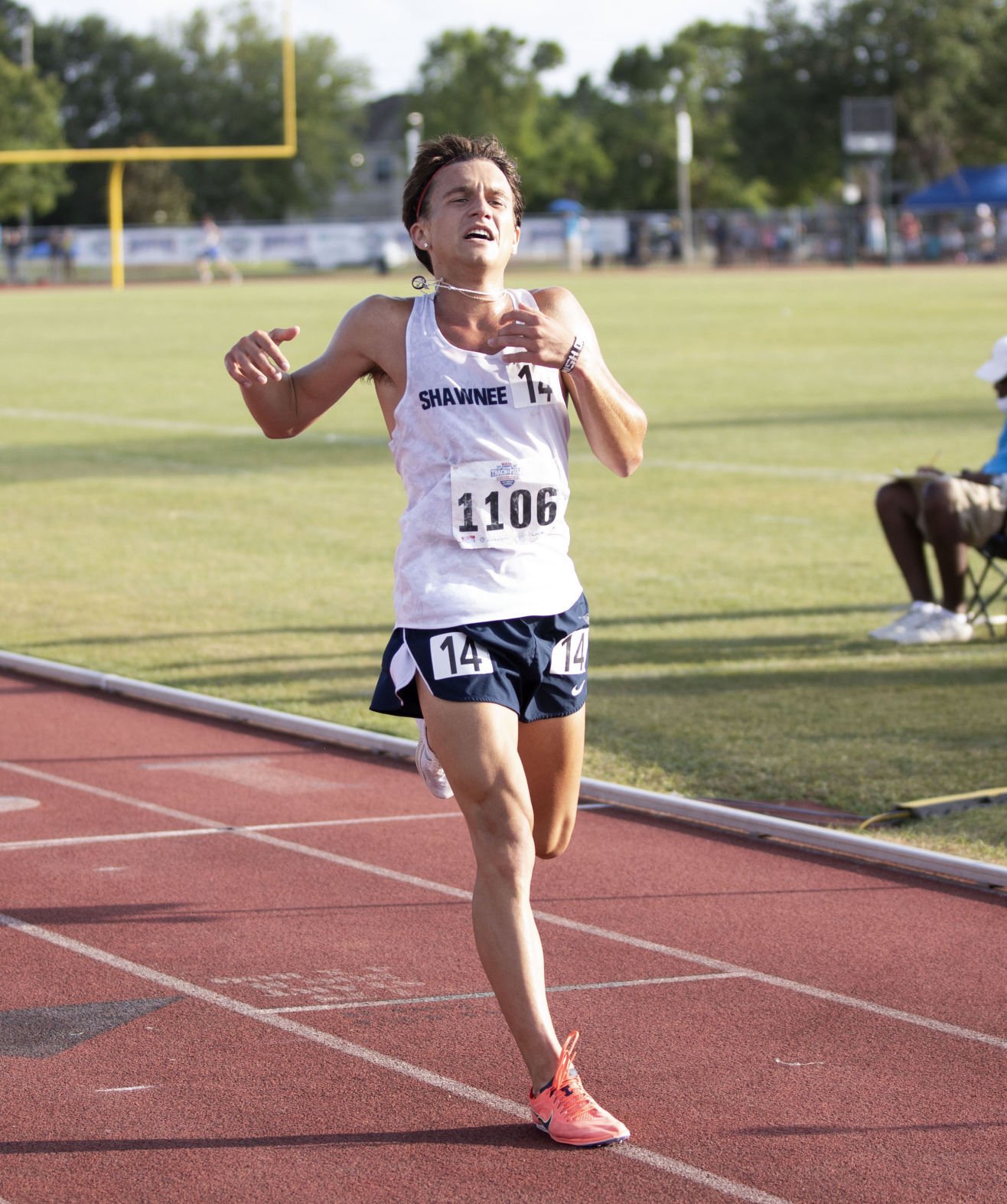 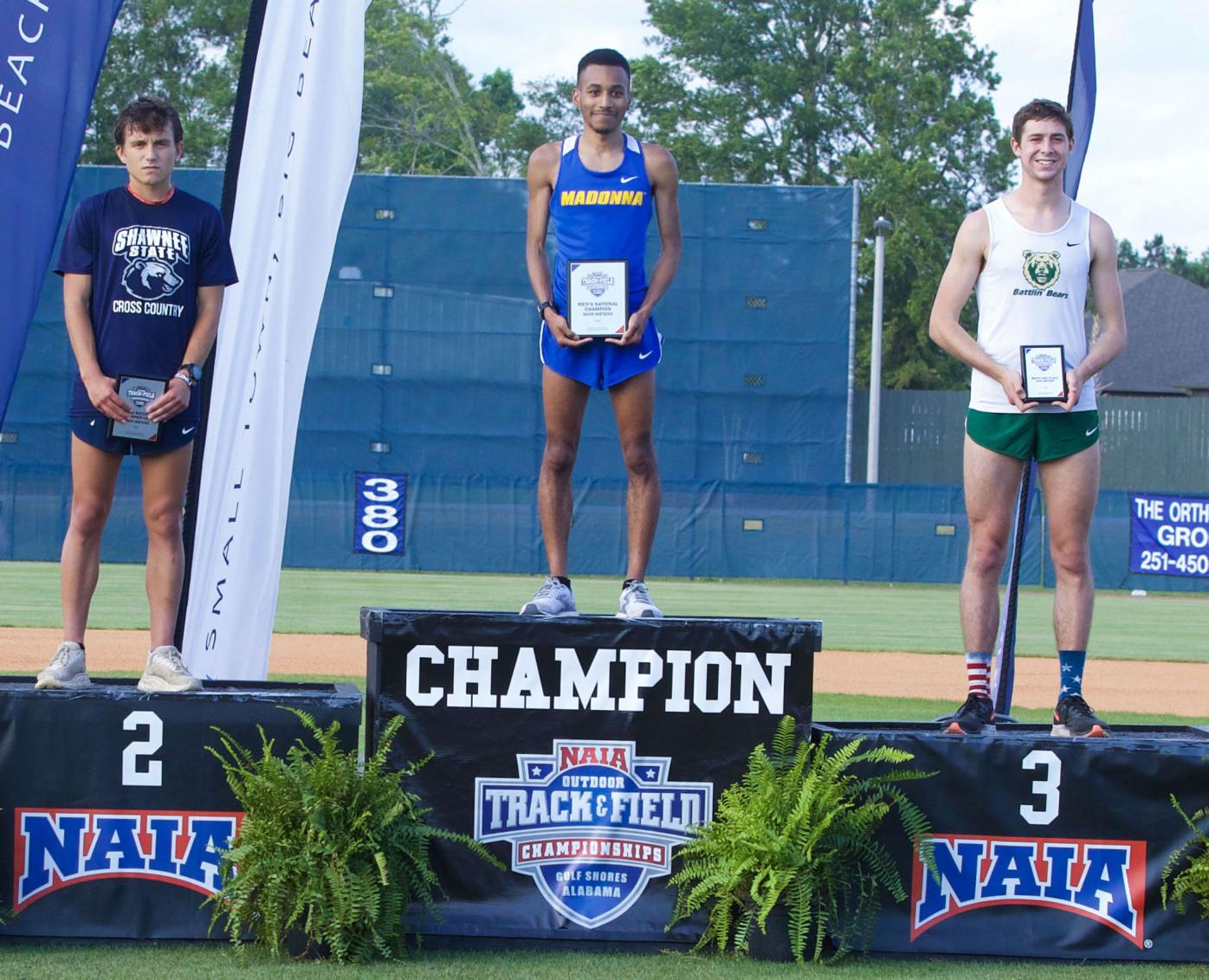 Hunter Hoover on the Podium at the NAIA National Track Meet. 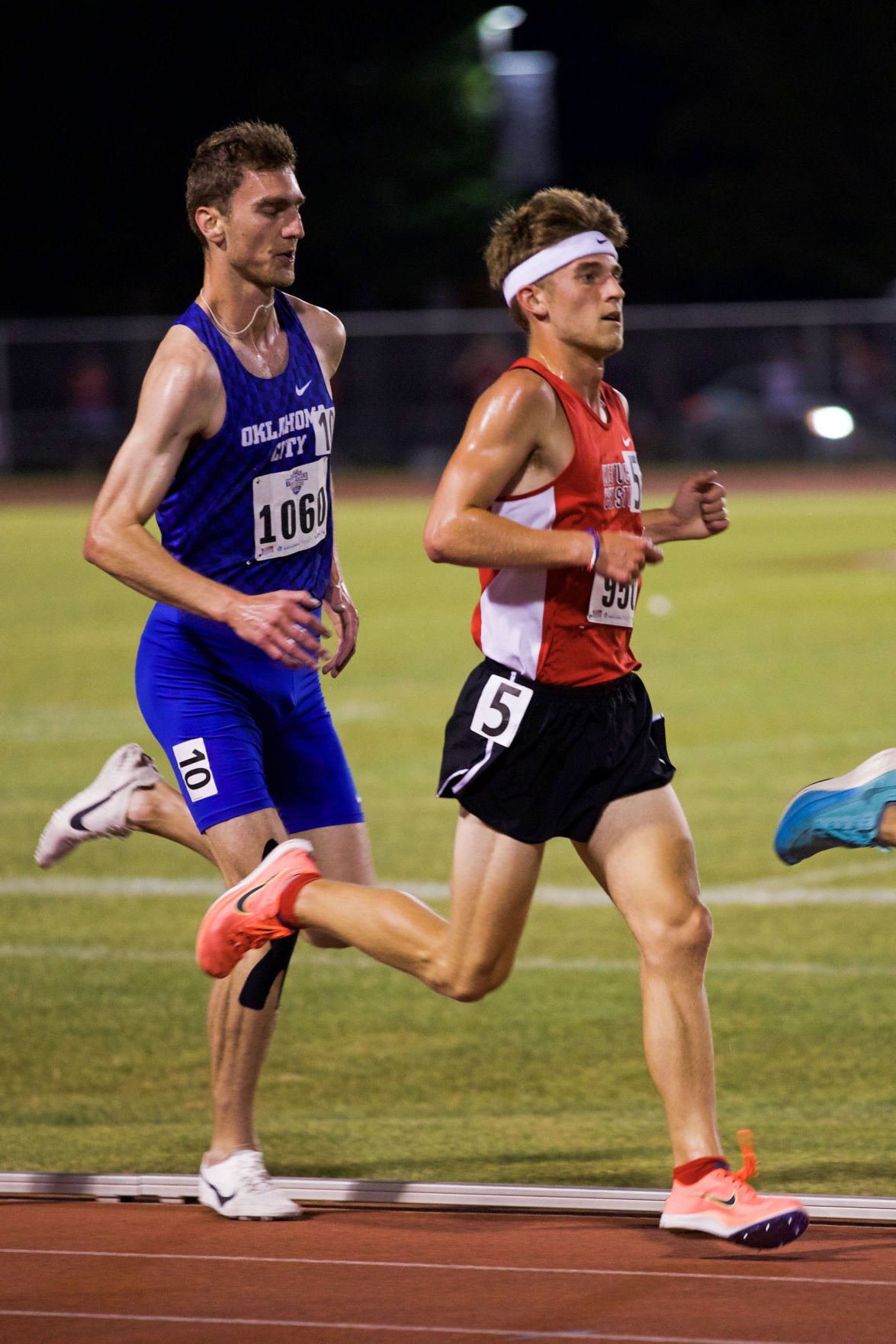 Evan Leist runs in the prelim race at the NAIA National Track Meet. 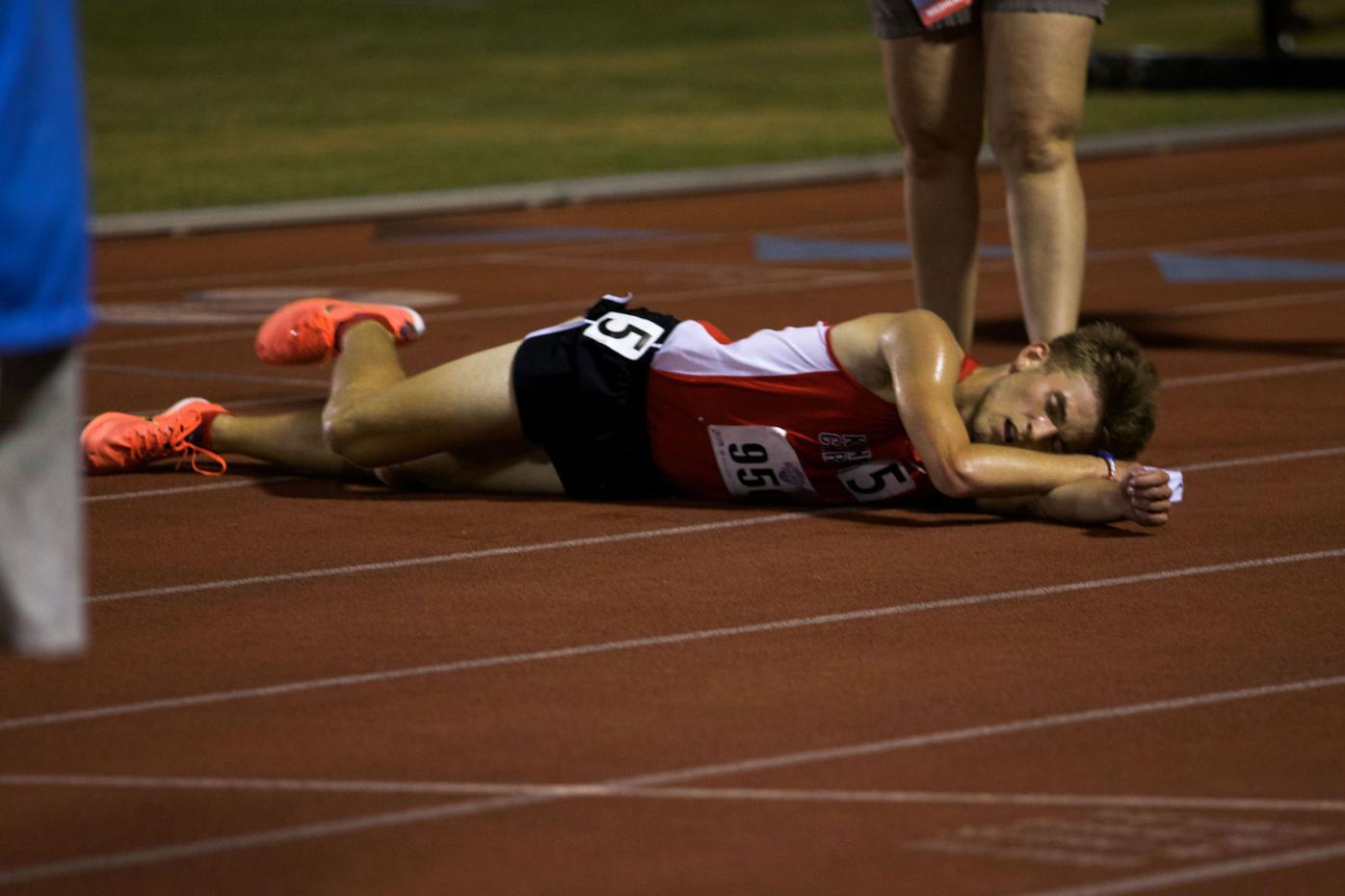 Evan Leist falls to the ground after finishing his prelim race.

Hunter Hoover on the Podium at the NAIA National Track Meet.

Evan Leist runs in the prelim race at the NAIA National Track Meet.

Evan Leist falls to the ground after finishing his prelim race.

Gulf Shores, Alabama- For the Men’s 5,000 Meter Preliminary races on Thursday night there were three heat races. Hunter Hoover of Shawnee State competed in the second race of the night and finished in sixth place. By rule, in order to advance to the championship race, a runner must finish in the top four of his race or achieve one of the next four best times overall.

Evan Leist competed in the third and final heat of the evening on Thursday. He finished that race in fifth place with a time of 15 minutes 2 seconds. That time would place him at 19th overall for the preliminary round.

After Hoover’s race it was unclear if he would advance until after the final heat was completed. When the dust settled, it was revealed that Hoover had achieved the 14th best overall time of 14:55, which would be good enough to advance him to the championship race.

In that championship race on Friday evening at Mickey Miller Blackwell Stadium in Gulf Shores, AL, Hoover delivered an outstanding performance and finished second overall with a time of 14 minutes and 43 seconds. With that performance, Hoover brings home All-American honors for Shawnee State University for the 2021 NAIA Track and Field season.

Q and A with All-American Hunter Hoover

Q: What are some of the challenges you faced this season to get to Nationals?

A: Some challenges I faced this season were doing basically 3 seasons of running all together. Usually cross, indoor, and outdoor are separated, so when they were in the same 6 month span, it was difficult to balance training for them sometimes. With that being said we lost out on a lot of fast meets that we usually go to for outdoor track but didn’t get to due to this.

Q: How did it feel to go from a tight cut in the prelims to making the final and running such a great race?

A: It felt really good. I had run the 10k on the first night of racing and had just mentally checked out. I felt really defeated. When the 5k prelim went off my goal was to qualify even if it had to be on time without going to the well, which thankfully happened. The previous outdoor season I had barely made the final in the 5k off time and wanted to make sure I’d get in this time even if that meant getting 5th in my heat, but have enough of a time to make it. I knew if I just got the final, I would show up.

Q: Describe the atmosphere and the experience you had at the NAIA National Meet.

A: The atmosphere was amazing. It was nice to just have and be at an actual track meet where there were spectators. I feel like we could’ve done without the heat and humidity, but other than that it is beautiful down there and an enjoyable place to race at. It’s just easy to enjoy running and everything when you go down there with your teammates. This I think was the most we’ve ever brought with us and it was just probably the most fun trip I’ve had in awhile.

Q: How does strategy play into the race when you’re going against some of the best runners in the country?

A: Strategy plays a big role, especially with this racing. Championship races are almost always tactical but sometimes they can be honest races. For example, in the 5k final we went out pretty quick, but the pace slowed in the middle mile of the 3 mile race substantially because it started to get tactical. The leader had dropped off and someone new took his spot who didn’t want to lead. The only goal I had made coming into the 5k final was to be present and no matter what stay attached to the front pack. Simple goals like that work out for me because it doesn’t take a lot of stress or thinking during the race.

Q: What did it mean to you to be able to represent a local university such as Shawnee State on such a large national stage?

A: It meant a lot. Running for Shawnee has always motivated me because we aren’t like other schools in the NAIA.

Q: What are some of your biggest takeaways from this season? (What have you learned about running, competing, or about yourself that you may not have already known?)

A: One of the biggest takeaways is relaxing and enjoying the moments. I used to and sometimes still do overthink racing and make it this big deal whenever it is racing- you go out there and run hard, whatever happens, happens. I’ve learned a lot about myself in terms of what I need to fix to be better.

Q: How does it feel to be an NAIA track All-American?

A: This one feels a little different than the rest. Since we started training last winter, my goal was to be an all American come outdoor season. Shawnee, before Owen Reeher last week, has never had an outdoor all American on the track. We’ve had 2x marathon all Americans but never an outdoor track all American. To have the highest placing ever on the men’s side at Shawnee for outdoor just is the icing on the cake. I’ve had big goals since I came to Shawnee, and after outdoor nationals this is a step in the right direction. This one made me feel even more motivated than I was before and excited for the future.