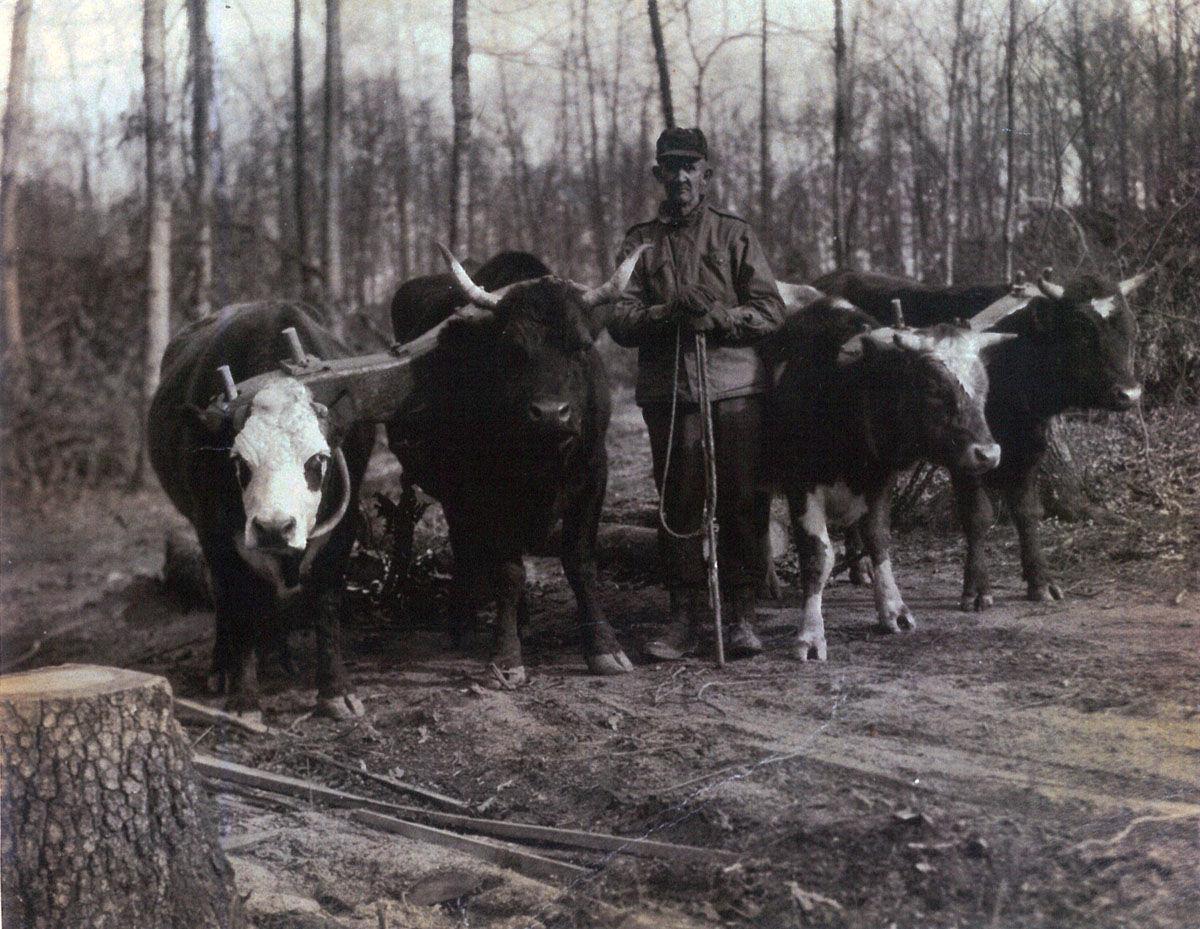 I have written stories about the men in Pike County who logged with oxen in the early days of Pike County. Such men like Mack Robinson, Layton Woods, Ora Smith and sons, Walt Burkitt, Ray McNelly, and Grady Dalton who actually logged with a yoke of oxen barefoot in the winter time when there was a big snow on the ground, Ed and Emmitt Lew, Paul and Bill Hickman, and Harley Powell, my wife’s uncle.

There were three generations by the names of Swaney, Herman, Carl and Carl Jr., Carl Swaney, and Mack Robinson who were partners in the logging and sawmill business once upon a time many years ago. These two men made their own yokes for their ox-teams. They made so many ox yokes, and these yokes were in such high demand, that these two friends named the yoke “The Robinson Yoke”. Today, they are scarcer than hens’ teeth and are quite valuable anymore.

I am very fortunate to actually have a Robinson Yoke. Mack Robinson’s trademark was the ox yokes he made that were painted bright red with a black stripe painted around the edge of the yokes.

Most of these men have passed away and those who are still living are probably in their 80s and 90s, and I imagine don’t work oxen anymore; but I will say this, these old gentlemen could probably tell some good logging stories that happened to them in the log wood many years ago.

You readers will probably wonder what oxen are. Oxen are nothing more than a pair of bull calves (castrated made into steers) and broke to work. The calves were broke to lead at an early age; I would say at a few days old. When the calves were fed their milk, you watched each calf to see what bottle each one drank out of and that was the way you yoked the calves up. You let the calves wear a small calf yoke for a little while to see how they would act. I forgot to mention, you named the calves at an early age. Names like Buck and Bright, Mutt and Jeff, Tom and Jerry, or whatever you wanted to name them. That was their name for life, and they knew their names.

What is an ox yoke, you readers might ask. The ox yoke is nothing more than a piece of wood formed into a yoke. The yoke was made by hand, probably out of Linwood or yellow poplar. Both of these varieties were light in weight but tough and wouldn’t break. The bows were made out of hickory wood. For the bows, you went to the woods, picked out a nice-sized Hickory sapling, cut it down, heated up a 55-gallon drum of water, and cooked the Hickory sapling until you could bend the sapling real easy. You then tied the ends to form a bow. You left the bows alone until the bows dried, and there you had your bows. A ring was put in the middle of the yoke where a log chain was hooked so the other end of the chain was hooked to a log.

The Swaney family made their own yokes and bows, and that way, they always had different sizes to use. I have heard that Mack Robinson and Carl Swaney were partners at one time or another in the timber business. I knew Mack Robinson personally, and when I worked at our local feed mill in Waverly, I ground Mack Robinson’s feed for his oxen, one hundred pounds of ground corn and one hundred pounds of ground oats. This feed was mixed together and fed to the oxen.

I lucked out a few years ago because I got to meet the famous Carl Swaney. He came to my house on Sunday and brought me some pictures of himself and his oxen. I treasure these pictures very much.

Most of the time when the tract of timber was a good ways from home, the fellow who logged the oxen stayed at the timber site where he could take care of the oxen and if there was a sawmill on the premise, a shanty was made out of the slabs that were taken off the mill. The logger would stay all of five days, and someone else would stay the weekend.

I have pictures taken in 1956 along the Scioto River in Pike County. Mack Robinson and his crew were cutting the Sycamore timber. The men built a pen out of barbwire, and a water tank was placed in the pen so the cattle wouldn’t have to drink out of the river. Mack Robinson would haul the water for the oxen from Jim Call’s Filling Station.

One picture shows the men loading logs on the truck. Two stout poles were leaned close to the truck. A yoke of oxen were placed on the other side of the truck. A log chain was wrapped and hooked in the middle of the log. The other end of the log chain was put in the ring of the ox yoke and the men were ready to load the logs. Two men would get on both ends of the log. The men would use cant-hooks to help steady the log as the oxen pulled the log into the truck. That would be a hard way to load logs, but back in those days, that was the only way men in the timber business could load their logs. That was a slow process of doing things, but things did get done back in those days.

The loggers carried bull whips made of leather with a cracker on the end of the whip. In my time, I have seen a logger take a fly off an ox and never touch the ox.

Oxen were used in the early days to farm the fertile fields of the Scioto Valley. Sometimes four to six yokes of oxen were used on a Prairie Schooner, depending on how much weight was in the wagons hauled by the pioneer families when they crossed the prairie. I grant you oxen were slow creatures, but man could they pull a load.

Now days, there might be a few people who still mess with oxen, but they don’t log with them anymore. I have trained a few yokes of oxen in my time, and they are a pleasure to train.