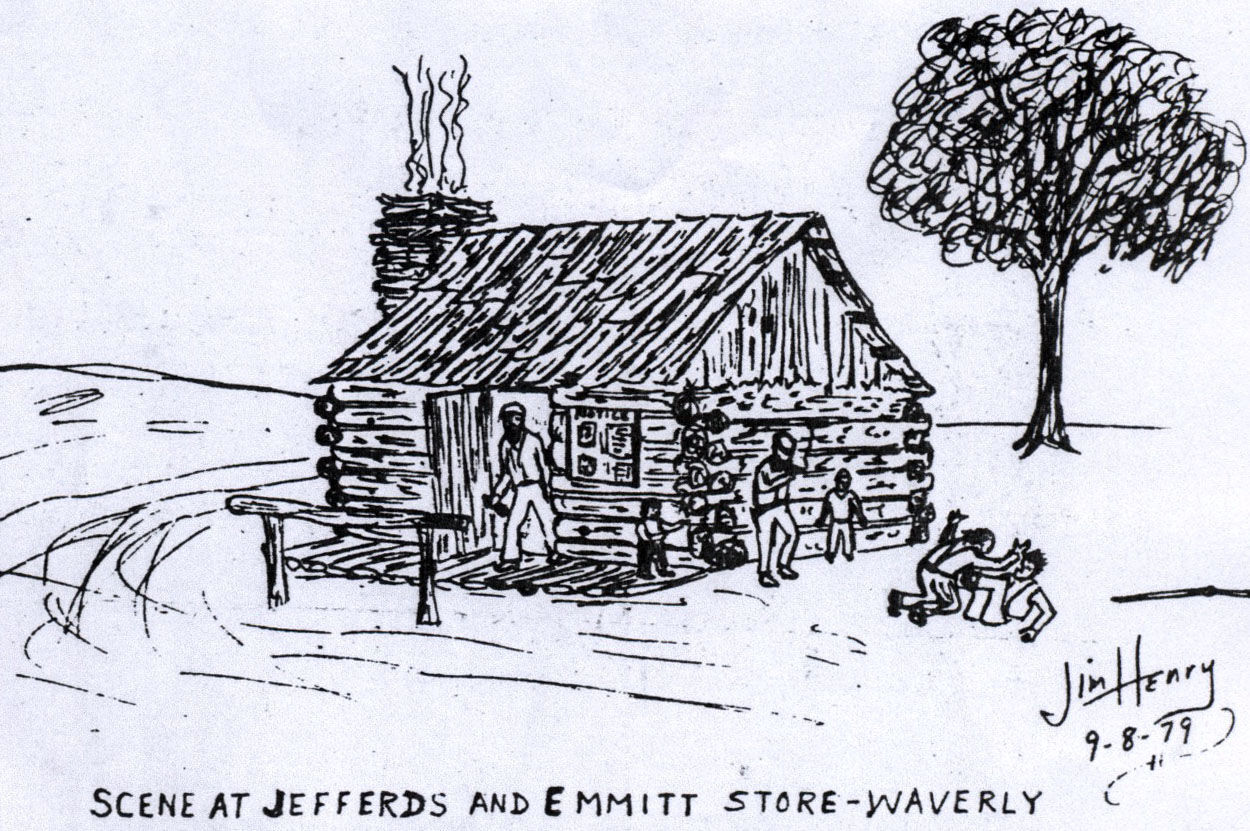 This week I’ll use an article that first ran in September 1979. “Cumie” was a great granddaughter of James Emmitt. She has since passed away and lived at the former James Emmitt brick home on the northeast corner of East North Street and North Market Streets. This home was close to the last store that is now known as Greenbaums (the last owners) and has not been used for years. This building sits across the street (North Market) from our public library. Some may remember the bar “Bee Hive” in this building in the 1960s.

This is dedicated to all who ever shopped here at Greenbaums.

This week’s article is another installment in the life of James Emmitt, often called the first millionaire of the Scioto Valley.

Pictured here is my idea of what the Jefferd -Emmitt log-cabin store might have looked as there were no photographs of it.

In 1828, the ambitious Emmitt felt that he had learned considerable in his dealings from teamster work on the Conestoga wagon freight hauling and decided to go into business for himself. After working for Hugo Cook (freight hauling) three years, he had exactly $10 coming to him.

Contacting Henry Jefferds, who at that time had the contract to carry the mail from Chillicothe to Portsmouth, the two decided to go into business together using Emmitt’s $10 and Jefferd’s credit; consisting mainly of his popularity. They bought a cabin at the edge of Waverly (Union town then) at the corner that is West Second and South Market St. This area will soon be occupied by the new addition to the First National Bank.

Jefferd’s owned a race horse (as he called it) and would arrive at the store, riding his horse and then singing the popular ballads of that time; he would entertain the customers. Then he usually suggested a race with the store as a starting point. He soon had a race set up with some of the farmers; then Emmitt (who had a horse with practically no speed) would bet $5 on his horse. Emmitt said this helped to stir up the boys. Of course, Jefferds always won, but Emmitt got his $5 back over the counter with the sale of Spruce beer, ginger cakes and other stock from the store.

The store was a popular place for the farmers and others to gather and discuss crops and the times and to watch or get into wrestling matches, foot races and other games. Jim Emmitt was around 22 years old, big and strong and this reminds me of Abraham Lincoln who at about this same time was running a store in Illinois.

One night in January 1829, Jim had gone to supper at his boarding house and heard a loud explosion. Coming outside he saw his and Jefferds’ store in flames. The big mud-lined wooden chimney had caught on fire and since there was no one there to throw water out of the container always kept there for that purpose, the fire continued until it reached two kegs of powder and in the explosion everything was lost and Emmitt was $300 poorer than when he started. Jim hurried to Cincinnati, on horseback, where he was told to buy all the merchandise he wanted on credit. The folks around here built a new cabin store and it was ready when the goods arrived.

Most of this information came from the booklet -”History of Pike County” by Mrs. Harold “Cumie” McCormick published in 1958 by the Pike Co. Commissioners. Cumie wrote a weekly historical and society column for the Waverly papers for many years.

This article is dedicated to Mr. Charles Pressler of Newark, a great grandson of James Emmitt. I had the pleasure of meeting Mr. and Mrs. Pressler two weeks ago.