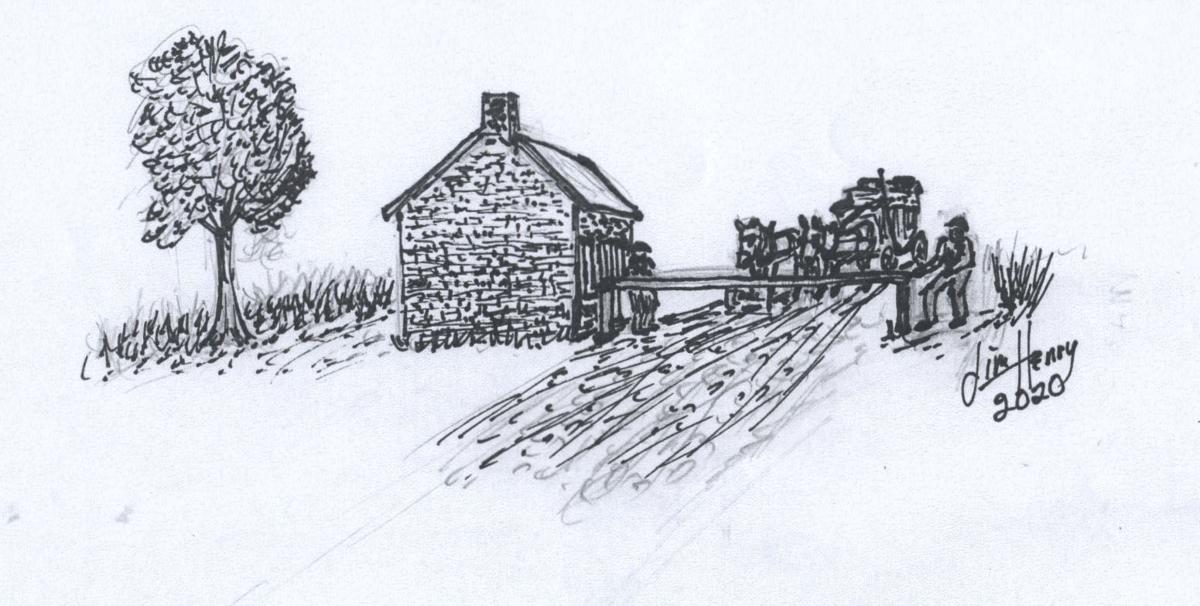 The sketch is Henry’s idea of how the tollgate may have looked when in use. This tollgate pole was set on a swivel next to the building so it could be swung around. The other end was fastened to a post until the toll was paid.

The sketch is Henry’s idea of how the tollgate may have looked when in use. This tollgate pole was set on a swivel next to the building so it could be swung around. The other end was fastened to a post until the toll was paid.

This week begins the five-part story of the old Portsmouth-Columbus tollgate on West Second Street (formerly U.S. Scioto Trail). When the present route through Waverly was constructed in 1940, this tollgate was bypassed.

The sketch here is my idea of how it may have looked when in use. This tollgate pole was set on a swivel next to the building so it could be swung around. The other end was fastened to a post until the toll was paid.

Now thanks to Blaine Beekman, the story can be told. I am always thankful for the material given to me by Blaine. He is my favorite author. I think I have all of the books he has written.

The former Tollgate Tavern on West Second Street in Waverly has been undergoing renovation for several months. Over the past half century, the building has passed through several owners. The history of the structure actually goes back more than 175 years. It was originally constructed as a toll house on the Portsmouth-Columbus Turnpike.

Pike County had been established in 1815 to provide easier access to county government for settlers in western Adams County, southern Ross County and northern Scioto County. The newly-platted town of Piketon received the designation as the county seat.

Transportation was an on-going issue. Early entrepreneurs brought cargo boats up the Scioto from Portsmouth, but the river had a number of rapids that made navigation difficult. Where three or four men could take a boat load of grain or produce down the Ohio and Mississippi Rivers to New Orleans, the trip down the Scioto would require 10 men.

The early settlers in Pike County traveled overland once they reached the Ohio country, roughly following Shawnee Indian trails. The Treaty of Greenville in 1795 forced the Native Americans out of the Ohio country. Pioneers moved quickly and Ohio became a state in 1803.

Rough roads were hacked out of the Indian trails, but hauling supplies by wagon was difficult. One of the first major wagon roads ran from Portsmouth on the Ohio River up the Shawnee Indian trail through Piketon to the first state capitol at Chillicothe. After Columbus was designated as the permanent state capitol in 1816, the road was extended to that town.

The need for better roads was critical by the mid-1820’s. The State of Ohio did not have the funds to improve the roads nor did most of the Ohio counties. Following the lead of several eastern states, the Ohio General Assembly in 1828 and 1829 worked out a procedure where counties could award franchises to private companies for turnpike construction. The roads would be built at the company’s expense. The money would be recouped from tolls paid by the turnpike users.

The first Ohio turnpike project was the Portsmouth-Columbus Turnpike. The initial cost estimate was $150,000, to be shared by Scioto, Pike, Ross, Pickaway and Franklin counties. The project was incorporated by the Ohio General Assembly on February 7, 1831.

The private turnpike companies in each county scrambled to find investors. In Pike County, Robert Lucas and John Vanmeter were leaders in the initial drive to secure funds. Both would hold important positions in local, state and national government through the 1830s and 1840s. Lucas and Vanmeter would find that the Portsmouth-Columbus Turnpike was only one of the issues that they had to consider during that period.

Unraveling the extremely complex history of the Portsmouth-Columbus Turnpike has proved very challenging. It would have been an impossible task for me without the assistance of Katrina Traylor in the Pike County Map Office and Frannie Cool in the Pike County Recorder’s Office. They were able to provide me with documents that gave direction to this series of articles.