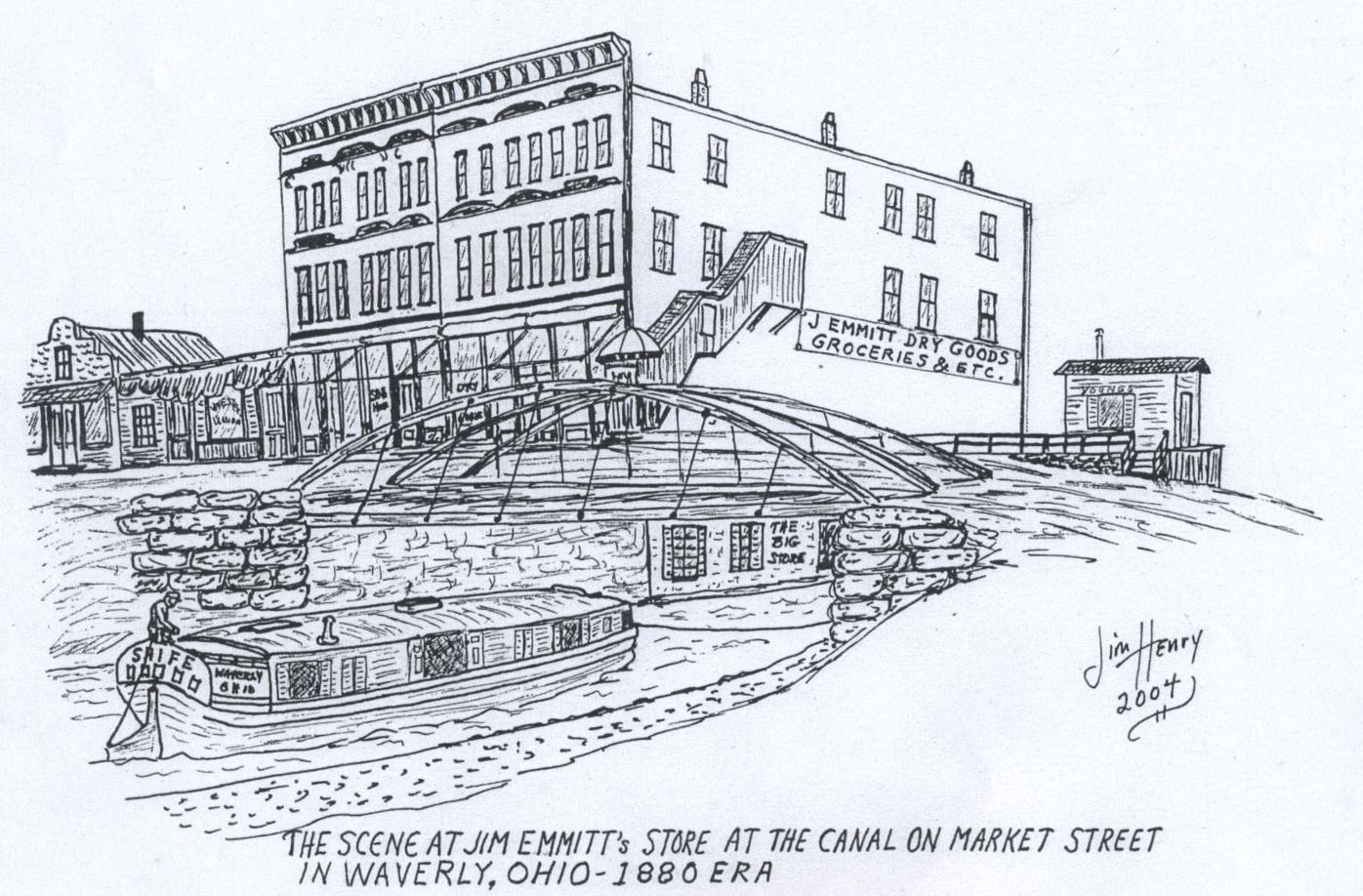 This week I’ll use an article written by E.S. Wenis entitled “RIDING THE RAGING CANAL” published in the Republican Herald March 4, 1937.

It was a perilous trip, that first ride south to Waverly (September 1832) from Chillicothe.

It was a perilous trip that first ride on the waters of the canal south to Waverly. It will be remembered that the water turned in, had a habit of disappearing entirely by being soaked up the gravelly stretches along the way and the bed of the canal could not afford a means of boat transport until the bottom sealed and permitted the needful 4 feet to buoy up the boats.

The first navigators of the waters to Waverly were Messrs. Jas. Campbell and Edward Edwards. These two Chillicothe gentlemen had gone into the business of the building of boats but their boats had a habit of leaking so rapidly that when they pulled up for the night, it was certain that the craft had to be pumped out before a move could be made in the morning. Sometimes the boats even sank and went to the bottom while being towed by the horses or mules.

Their trip south was both exciting and laborious. Upon their arrival there they jumped in with the celebrants and had the barbecued beef. There was another boat, which made the journey back of the first ramshackle affair, and it was a good seaworthy boat called the “Governor Worthington.” This vessel belonged to two Chillicotheans also. They were Michael Miller and Martin Bowman, the progenitors of the families of those names many of who are still living here.

This boat carried a full cargo of passengers and as it was of 25 tons burden it had quite a goodly load of live freight on that trip. The passengers joined in with the Pike County folks and listened to the speeches made by Duncan McArthur, who was the Whig candidate for governor at that time and Robert Lucas, who was the Democratic standard bearer. Incidentally, Lucas defeated McArthur at the election.

James Emmitt, the promoter, when he saw the “Governor Worthington” barge at the wharf in Waverly immediately was seized with the desire to own her. He dickered with the owners Messrs. Miller and Bowman and before the day had passed had purchased it, paying $600 for it.

Entering into partnership in this marine venture with Mr. Emmitt was an old man named Eli Harrison, who was a partner with Mr. Emmitt in the wagon business. The “Governor Worthington” was put into commission with Emmitt as the captain and the first trip he made was to Newark, where he went to get two mill stones for his mill in Waverly. On the way back a cargo of whiskey was taken aboard and O.A. Schuttee, who was a clerk in the store of Mr. Francis Campbell here made out the bill of lading for that freight.

Captain James Emmitt became so enthusiastic about the nautical life that he insisted upon making the first trip to Portsmouth when the canal was supposed to be open for navigation that far. He became so eager about this that he put his boat afloat upon the canal and started for Portsmouth before the canal was ready for navigation at all. For this he was severely censured by Captain Cleveland, head of the engineering corps and constructing the canal. Upon this trip, Emmitt was only able to get ten miles this side of Portsmouth, for the waterway was not completed and would not float the boat any further.

As in the case of completing the other leg of the canal from Chillicothe to Waverly, a great crowd assembled and the brass cannon and brass bell mounted upon the deck made so much clamor that the people from this countryside from a long ways back rushed to the canal to see what it was about.

One of those who witnessed the opening into Waverly was Miss Minerva Lucas, daughter of Governor Lucas, who married a man named Summer, and moved to Iowa, and upon his death she went to Colorado where she died.

My sketch is one I drew a few years ago as I think the scene would be looking from the site of the celebration in September 1832 when the canal boat Worthington arrived.