Sign Up
Log In
There are no services available.
You are the owner of this article.
Edit Article Add New Article 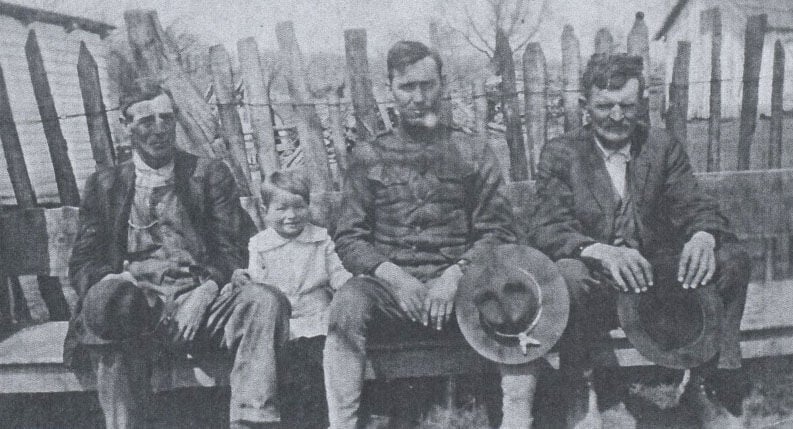 This photo is one my dad picked up a few years ago that had no identification. But one man is in a World War I Army uniform. Maybe some reader will recognize these people. Give me a call at (740) 947-5625; if no answer after six rings, leave a message.

This photo is one my dad picked up a few years ago that had no identification. But one man is in a World War I Army uniform. Maybe some reader will recognize these people. Give me a call at (740) 947-5625; if no answer after six rings, leave a message.

In the future I’ll feature a five-part story about the old Toll Gate building on West Second St. complied by Blaine Beekman. This building was on the old Scioto Trail from Portsmouth to the capital city of Columbus. Now U.S. 23 follows mostly the same route. This building is now being restored.

For this week, I am using items from the booklet “Jackson Township, Pike County, Ohio News Items and Tidbits” published by the Pike County Genealogy and Historical Society. The photo is one my dad picked up a few years ago that had no identification. But one man is in a World War I Army uniform. Maybe some reader will recognize these people. Give me a call at (740) 947-5625; if no answer after six rings, leave a message.

Here is an item from the Republican Herald of 11 Jan. 1934. W.H. Maloy, born 16 May 1868 and died July 1954 who has served as postmaster at Omega for the past 22 years had tendered his resignation to the post office department. Maloy was elected as township clerk of Jackson Township at the last election and resigned for that reason.

Maloy is a Democrat. His successor has not been named.

The Joseph Climer Post No. 6092 of the Grand Army of the Republic (Veterans of the Union Army 1861-1865) was organized in 1833 at Omega with Major James C. Foster as it’s first commander.

A trip on the canal boat “Bostona”, Captain Washington Williamson, from Portsmouth to Sharonville (later name changed to Omega) in 1866 cost $1.75 and from Chillicothe to Sharonville was $1.00.

Here’s a copy of the article I mentioned above. It comes from the 18 Feb. 1954 Waverly Watchman about Jackson Township ...

A fire which at first was only reported in Waverly as a small brush fire five miles east of here Monday afternoon turned out to be a raging inferno whipped by a 25-mile-per-hour wind which threatened the village of Omega. It was reported the flames came within five or six feet of some of the houses in the south end of town, and covered approximately 100 acres before being brought to a halt.

Authorities said that the fire was caused by a farmer in the vicinity starting a brush fire, which went out of control, the flames catching adjoining fields.

According to the report by mid-afternoon most of the acreage in the west bottoms of the Scioto River from about two miles northeast of Waverly were ablaze.

As the flames reached the Omega cemetery and the yards of two homes on the southern limits of the village, the Piketon Fire Department joined in the battle by setting backfires and digging trenches, thus preventing the fire from damaging homes in the vicinity.

Electric service into Omega was shut-off for a short time during the afternoon when a pole carrying the power lines was burned.

Adding to the consternation of Omega inhabitants was the low later levels in the creek and the nearby Scioto river. Under the supervision of Fire Chief Frank Baldwin of Piketon, six members of his department did yeoman work on the e tank truck watering down a strip in front of the advancing blaze. Chief Baldwin was assisted by John Foster, Ed Ritchie, Leslie Snyder, Paul Ware, Sam Sanders and Frank Cutler.

The local fire department of Pee Pee township truck was unable to answer the alarm because the fire was in Jackson township, with which it has no contract for protection.

Mr. Myers of the State Forestry department said the he also had word of a 15-acre brush fire near Lake White which was brought under control Monday night.

Chief Hayes of the Waverly department said that he also had information of a 46-acre fire near Camp Creek in southern Pike county Sunday.

High winds were blamed for helping speed up the drying of the fields and woods which had had no rain for a two week period. 18 Feb 1954 The Waverly Watchman

Update to the old Ohio 335 (Jackson Township) school photo with the students published a few weeks ago: The school building has been identified by Bill Weinrich who once lived nearby. He knew the African American children as the Trent family whom he knew after they grew up.