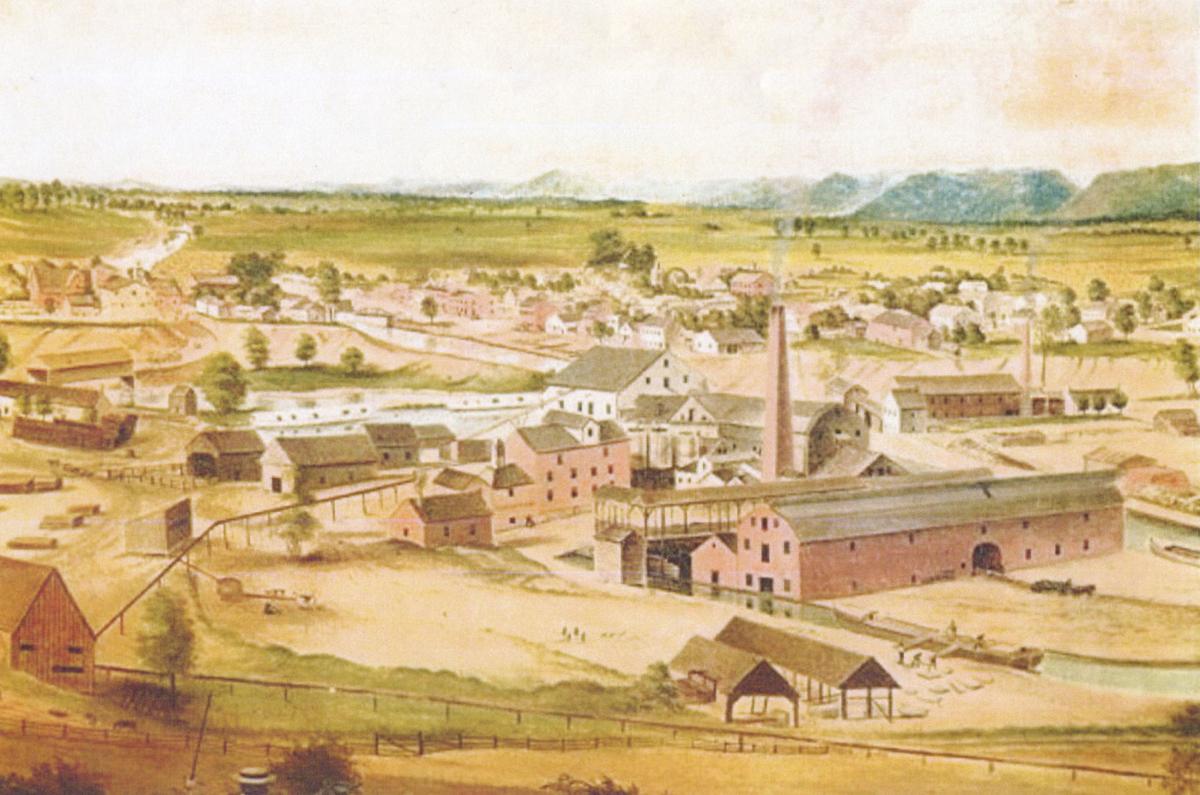 This painting of James Emmitt’s industrial completx in Waverly was described by David Neuhardt in the 2008 of “TOWPATHS”, a quarterly edition of the Canal Society of Ohio. Henry obtained a copy of the painting from Mike Corwin and received a copy of the “TOWPATHS” article from Barb Early.

This painting of James Emmitt’s industrial completx in Waverly was described by David Neuhardt in the 2008 of “TOWPATHS”, a quarterly edition of the Canal Society of Ohio. Henry obtained a copy of the painting from Mike Corwin and received a copy of the “TOWPATHS” article from Barb Early.

This article is possible because Barb Early gave me the 2008 edition of “TOWPATHS”, a quarterly edition of the Canal Society of Ohio.

An article in this booklet describes the copy of the 1859 painting that Mike Corwin gave me a few years ago. David Neuhardt, a member, wrote this interesting description of this painting. I’ve not seen the artist’s paintings of my hometown of Lebanon, Ohio.

In the fall of 2008, Garth’s Auctions in Delaware, Ohio, famous nationwide for many years for their Americana auctions, cataloged an interesting oil painting by nineteenth century landscape artist Richard H. Sheppard for their annual Thanksgiving weekend auction. Dated 1859, the painting was thought to show an unidentified town in the mountains of western Maryland, the state in which Sheppard was active in the 1850s before moving to Ohio in the late 1850s or early 1860s.

Based on having led several canal tours in the Scioto Valley and having seen a good many photos of the area, however, the author quickly recognized the place the painting actually illustrated — James Emmitt’s bustling industrial complex on the Ohio & Erie Canal at the south end of Waverly, Ohio. A review of an online Sanborn Fire Insurance map of the complex from 1892 and an email to David Meyer, author of the preceding article and a recent book on the Ohio & Erie Canal in the Scioto Valley, confirmed the author’s initial conclusion. Not only does the painting show Emmitt’s businesses, it probably is not too great of a leap to guess that Sheppard probably painted the view on commission for Emmitt (who may well be the man shown in the foreground of the painting with his walking stick in the air “surveying his domain”). Emmitt, whose very colorful 1888 biography states on the title page that it was “revised by himself,” was not one to hide, or under-estimate, his accomplishments.

Based on Garth’s research, Sheppard, who was born in 1819, was working in the 1850s in Baltimore as a painter of portraits, miniature portraits and landscapes. He last appears in the Baltimore directories in 1856, and then reappears in Gallipolis, Ohio in 1865 when he purchased property in that city. He died in 1895. Sheppard is known to have painted a pair of similar landscapes of Lebanon, Ohio.

The Waverly painting had been in an Ohio collection for many years. The high hills shown in the background of the painting were long thought to represent the western Maryland mountains; however, they actually are the hills lining the east side of the Scioto Valley—the same hills that, just to the north in Chillicothe, served as the inspiration for the “mountains” so prominently featured in Ohio’s state seal. Emmitt’s famous distillery, with its “drive through” bonded warehouse, occupies the center foreground while the grist mill buildings are just behind.

Just beyond (north of) Emmitt’s mills, the Waverly canal basin, occupied by two line boats, can be identified. The canal itself is to the right of the complex, with a side cut to the distillery and what appears to be either a boat under construction or being loaded with lumber in the foreground. North of the Emmitt complex, a covered bridge carries the Waverly and Sunfish Turnpike across Crooked Creek on the left, while the Market Street bridge over the canal and the Grand Hotel can be seen in the heart of town.

Comparing the painting to the map accompanying Dave Meyer’s article will show other structures that can be identified. Two prominent features of the map do not appear in the painting, however. George Emmitt’s Pee Pee Mills, which were not constructed until five years after the painting was made, would later occupy approximately the site of the shed built against the hill in the left foreground. Lock 44 cannot be seen in the painting because it is on the far side of the distillery and mill complex.

Garth’s sold the Sheppard painting on Thanksgiving weekend, with commission, for just shy of $50,000. Emmitt undoubtedly would have been pleased with the price it achieved--he liked “big” things. One can only hope that the painting is now hanging in the home of someone who is, or with the chance to study this wonderful artwork will become, a dedicated Ohio canal historian.

Thanks to Ohio decorative arts historian Andy Richmond of Garth’s Auctions for providing a digital copy of the painting and permission to reproduce it in Towpaths.