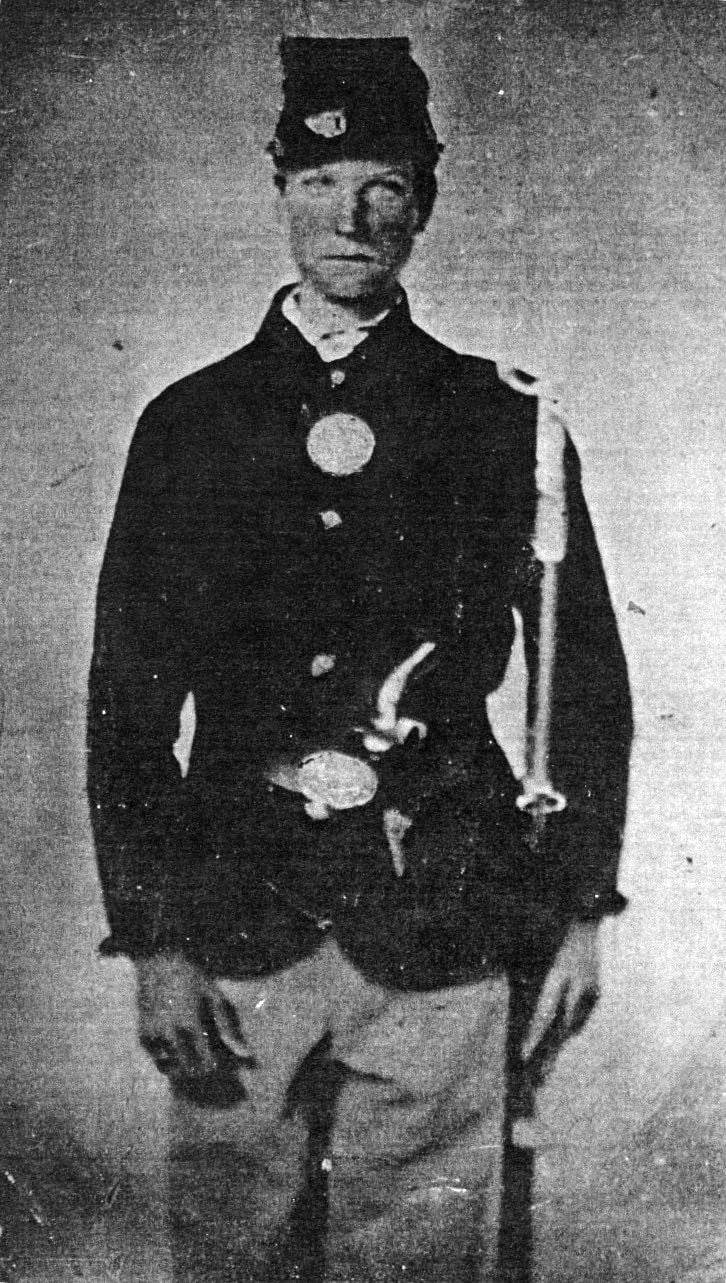 The photo this week shows a Union solider taken in the 1861-1865 time period. This is from a tin-type photo found in the former Dixon home on Ohio 551 by the Thomas family, the present owners. It is likely a Dixon family ancestor.

The photo this week shows a Union solider taken in the 1861-1865 time period. This is from a tin-type photo found in the former Dixon home on Ohio 551 by the Thomas family, the present owners. It is likely a Dixon family ancestor.

Taken from the Waverly Watchman Newspaer — July 18, 1889 — Caned at the Dead Hour of Night

On Monday night about 11 o’clock, as we were indulging in a quiet snooze preparatory to going to sleep, we were suddenly aroused to a sitting posture by the boom of Captain Haubeil’s “six pounder”from the south end of town, and as we sat there in bed, wondering what in the nation could be up, we heard the trampling of many feet on our pavement, the sound of numerous voices and the occasional blast of a bugle horn, as the tumult, died away in the distance.

We had about made up our mind that the great uproar was occasioned by some bad boys who were out on a jamboree, when we chanced to hear a small boy from the street cry out in joyful expectation of an exciting scene “They are going down to cane Col. Higgins.” We then came to the conclusion that editor Snyder and his best friend, “Col.” James had organized a gang of indignant patriots and gone down to the Cols. Residence to wreck vengeance upon the gallant old Col of the heroic 73rd for daring to have a 4th of July celebration without consulting them.

At first thought of such dimmable outrage, we made up our mind to take our flobert and go to the assistance of the Col. But before we had made preparations to carry out our intentions, the sound of delightful music by the Waverly band, accompanied by another boom from Captain Haubeil’s battery, satisfied us that the Col. was being besieged by friends instead of enemies, and we there upon settled down to the conclusion that things were going well with him and that we would secure particulars in the morning.

It seems that a number of the Col’s friends and admirers came to the conclusion that he deserved some recognition for his valuable and untiring efforts to render the recent celebration at this place, a grand success it was, and they accordingly raised a fund and purchased the Col. a handsome gold headed cane, and the tumultuous racket we have described, was a part of the presentation ceremonies.

On the crowd reaching the Col’s residence they found that he had retired for the night, but the boom of the cannon, the music of the band and the loud calls of the crowd soon brought the Col. to the front door, and as he made his appearance, Atty Eylar stepped to the front and in a neat and appropriate speech, presented the cane.

To say that the Col. was surprised and affected over the affair, would be putting it too mild, entirely. So deeply was he affected that it was with great difficulty that he commanded sufficient words to express the deep gratitude he felt for the distinguished honor that had been shown him. The crowd knew however that the Col. was thankful for the present and they accordingly withdrew, feeling well satisfied with the exercises of the occasion.

My wife and I enjoyed the Waverly High School Madrigal Singers performing at Piketon Church of Christ Dec. 7. It was an inspiring and blessing of music led by Matt Radford. For humor, the group performed their own version of the Twelve Days of Christmas After a talk, we retired to the dining room and enjoyable meal by the church members.

The introduction to the program of the Madrigal Singers was a very thoughtful and insightful message.

The photo this week shows a Union solider taken in the 1861-1865 time period. This is from a tin-type photo found in the former Dixon home on Ohio 551 by the Thomas family, the present owners. We’re sure it is of the Dixon family ancestors.

I hope you all enjoyed the Christmas season with loved ones and remember those who are serving in the U.S. military services here and abroad.