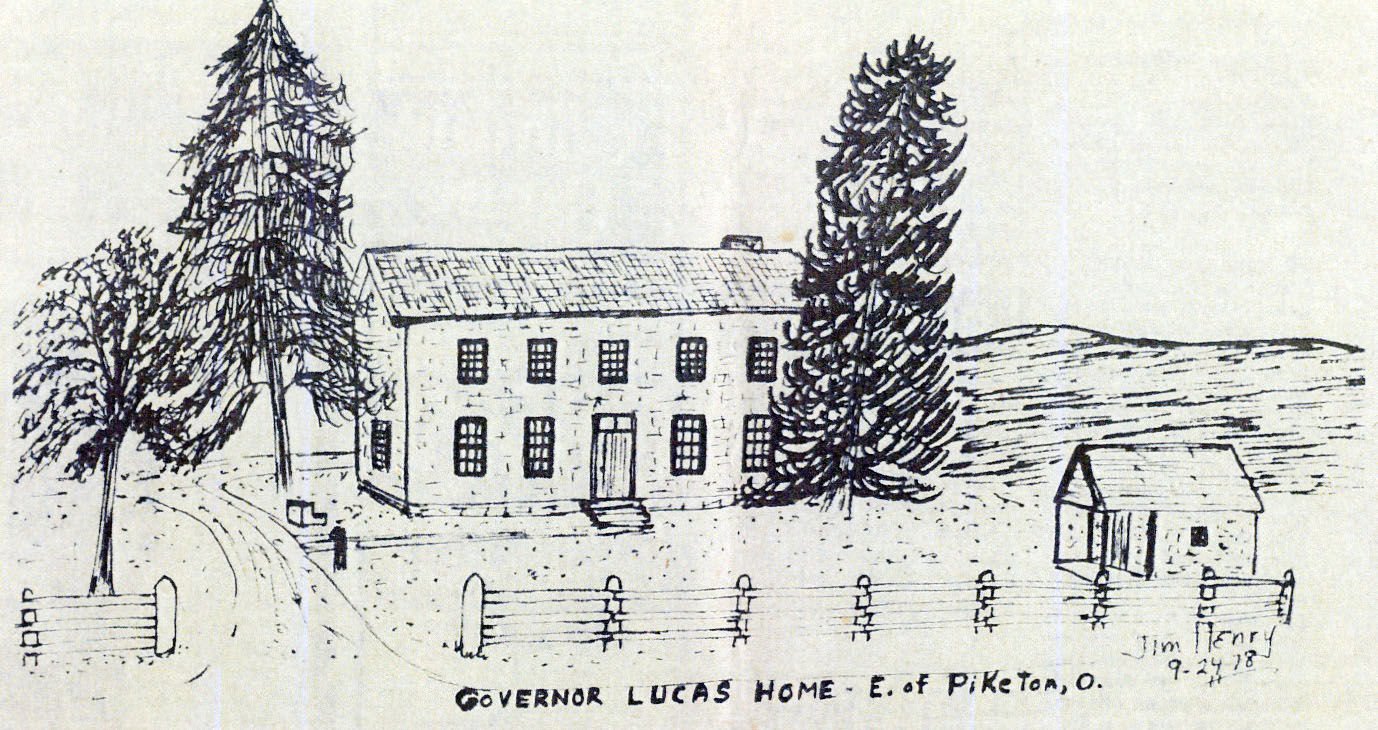 Here is a sketch of Governor Lucas’ place, drawn by Henry in 1978. The red brick home still stands east of Piketon. Henry wrote an article about Governor Lucas in September 2018, which he plans to possibly re-run at a later time.

Here is a sketch of Governor Lucas’ place, drawn by Henry in 1978. The red brick home still stands east of Piketon. Henry wrote an article about Governor Lucas in September 2018, which he plans to possibly re-run at a later time.

The incorporation of the proposed Portsmouth-Columbus Turnpike by the Ohio General Assembly in February 1831 started a flurry of activity to find buyers for the stock in Pike, Scioto Ross, Pickaway and Franklin counties.

The Pike County contingent was headed by Robert Lucas, one of the leading politicians in the state. Lucas had lost the election for Governor in 1830. He was planning to run again in 1832.

Lucas was born in Mecklinburg, Virginia, in 1781. In 1800, his family left sizeable land holdings in Virginia to come to the Ohio Country, settling in what would become Scioto County. His two older brothers founded the town of Lucasville. The family quickly became involved in area politics.

Back in Virginia, Lucas had been educated by a private tutor in mathematics and surveying. In December, 1803, he was appointed the Scioto County Surveyor. Two years later he received a Justice of the Peace appointment in Scioto County.

Lucas possessed a commanding physical presence. He used that quality to assume leadership positions in the Scioto County regiment of the Ohio Militia. By 1810, he was a Brigade General in command of the local detachment.

The War of 1812 brought Lucas his first national attention. American General William Hull surrendered Fort Detroit to the British on August 16, 1812, without putting up a defense. Lucas, serving under Hull, kept a daily journal which was used as key evidence in the court martial. Hull was found guilty and sentenced to be executed. He was later pardoned by President James Madison. The judge at the court martial was Martin Van Buren who would play a later role in Lucas’s career.

In 1816, Lucas moved to Piketon and opened a general store. Pike and Scioto counties were in the same Senate district, so Lucas retained his seat. In 1818 he was chosen Speaker of the Senate.

In 1822, Lucas lost to William Kendall, his former brother-in-law and his current partner in the store in Piketon. Kendall was widely respected in Scioto County and proved a tough political opponent. Lucas was able to recapture the Senate Seat in 1824. He won in 1826, but Kendall was victorious in 1828.

Kendall decided to resign from the Ohio Senate in July 1829. Lucas won a special election to reclaim the seat. Once again, he was chosen Speaker of the Senate. In 1830, he made an unsuccessful run for Governor.

The 1830 defeat for Governor made Lucas more determined to make a second run in 1832. He regularly entertained Ohio’s political leaders at his farm at the eastern edge of Piketon. He had named the farm Friendly Grove to honor his second wife, the former Friendly Sumner.

In the Spring of 1832, Lucas traveled to Baltimore to participate in the Democrat Presidential Nominating Convention. Andrew Jackson was seeking a second term as President. Vice President John C. Calhoun had resigned over political differences with Jackson. The President wanted to make sure Martin Van Buren received the party’s nomination for Vice President. Lucas was chosen Chairman of the convention and Van Buren did indeed receive the Vice-Presidential nomination. In the fall election, Jackson and Van Buren were elected.

Returning to Ohio, Lucas again ran for Governor. He received a big boost when the incumbent Governor decided to run for Congress. Lucas was elected Governor that Fall.

Lucas was elected to a second term in 1834. The following two years were mainly focused on a dispute with the government in the Michigan Territory over the ownership of the Toledo strip. At one point, Lucas went up to the disputed territory with 600 militia troops. The Governor of Michigan Territory reportedly had 1,000 volunteers. Battles were avoided and the dispute was finally settled by President Jackson and the United States Congress. Ohio received the land around Toledo which was then named Lucas County. Michigan Territory received the Michigan’s Upper Peninsula in the settlement.

The Ohio Constitution limited Lucas to two terms as Governor. He returned to his farm in Piketon in 1837. The Portsmouth-Columbus Turnpike was still in a state of inertia, but Lucas, certainly one of the most influential men in the state, once more found his attention distracted by a new political issue and a new challenge.