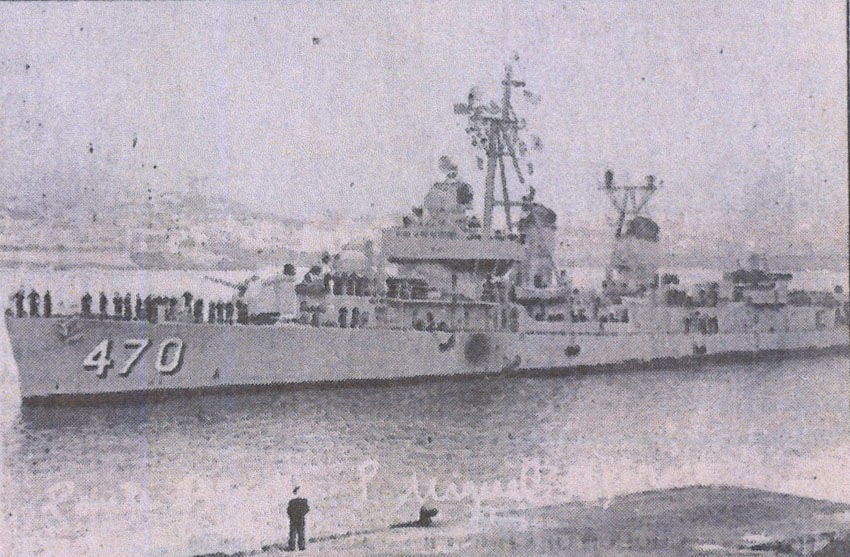 This postcard was taken by a photographer in the Portuguese Azore Islands during the time Henry’s destroyer was in port.

This postcard was taken by a photographer in the Portuguese Azore Islands during the time Henry’s destroyer was in port.

This time of year reminds me of a trip I took years ago. I was sailing aboard the U.S. destroyer Bache DDE470, where I had reported for duty at Newport News, Va.

I was assigned to the ship earlier but had to wait at the Norfolk barracks, until the ship returned from Cuba on a shake-down cruise. That is when a ship had gone through an overhaul — a six week cruise to the Caribbean Sea was taken to test all equipment and upon return to the Norfolk area, no place was available to tie up except the Norfolk-Newport News ferry wharf. I reported aboard the day after Christmas 1956 and our destroyer was fourth out from the pier (wharf). One of my jobs was to carry food provisions from a supply truck through three other destroyers to ours. One of the food items was 100 pound sacks of potatoes — not easy for this lightweight to carry on my shoulders. I didn’t have to do this on my last job in the Produce Department at Big Bear in Waverly.

About a month later our ship traveled to Jacksonville, Fla., plane guarding for the carrier U.S.S. Franklin D. Roosevelt, along with our destroyer Squadron 28 — eight all told.

Then upon arrival in Norfolk, we learned of a new mission for our squadron — Red Sea and Persian Gulf duty — four ships for each area. Before departure we were issued khaki colored short pants for shipboard duty in that hot climate. But when we departed Norfolk March 18, 1957, the weather was anything but hot. In fact, overcast, gloomy and cold was what we sailors saw as we departed Norfolk and headed out through Hampton Roads (the waterway between the Naval Base and Newport News) to the Atlantic Sea. The weather and seas became so rough and our so-called “greyhound” was tossed around for most of the next seven days that we sailed before seeing land again — 2,401 nautical miles in distance.

Needless to say, many shipmates were seasick including myself. Although, most sailors were really sick only the first day, then recovery for the next couple of days before we gained our sea legs as the old “salts” called getting used to the rolling and pitching of the waves and able to hold food and our balance!

We arrived at the port of Ponta Delgado in Portuguese Azore Islands off the coast of West Africa on the afternoon of March 23 much to our relief. Even though the day was cloudy, our spirits were up when “liberty call” was announced and the warning — “don’t drink the water.” The advice was to drink wine for safety. More good advice from the old salts was to eat a good meal before doing anything else. Several of us found a nice cafe and ordered steak, eggs, bread and win. I can’t remember when food tasted better.

Our next step was to hail a cab and everything we’d heard about foreign cab drivers behavior came true in our short experience. He drove fast through the narrow, hilly, windy cobblestone streets; blowing his meek horn at every crossing. We quickly asked to be taken to a nice cafe and for the rest of the evening we walked.

At the first stop, a native photographer asked our ship name and if we would like to order a postcard photo prior to our ship arriving in port. Several of us did but we asked how he could deliver the card to us that evening. He said if we stayed within a few blocks of the docks, he’d be back in an hour with the finished cards. And he did find us. The photo used with this column is the finished product.

A couple of Portuguese fellows talked to us in good English as they worked at the nearby U.S. Air Force Base. They asked us to send them names and addresses of single women so they could get acquainted and possibly come to the U.S. as future husbands. I don’t know if anyone did this.

Since we had “Cinderella Liberty” (must be aboard ship by midnight) our time to explore the little town was short but we found the people friendly and the town neat and clean. I enjoyed my first foreign port.

My old ship, the U.S.S. Bachie DDE470, was built in 1942 and served many areas during World War II and a reunion is held for any ex-shipmates of any years aboard.

This is dedicated to shipmate Bob Adams of South Webster who stayed in the regular Navy and retired to Scioto County, later New Jersey.