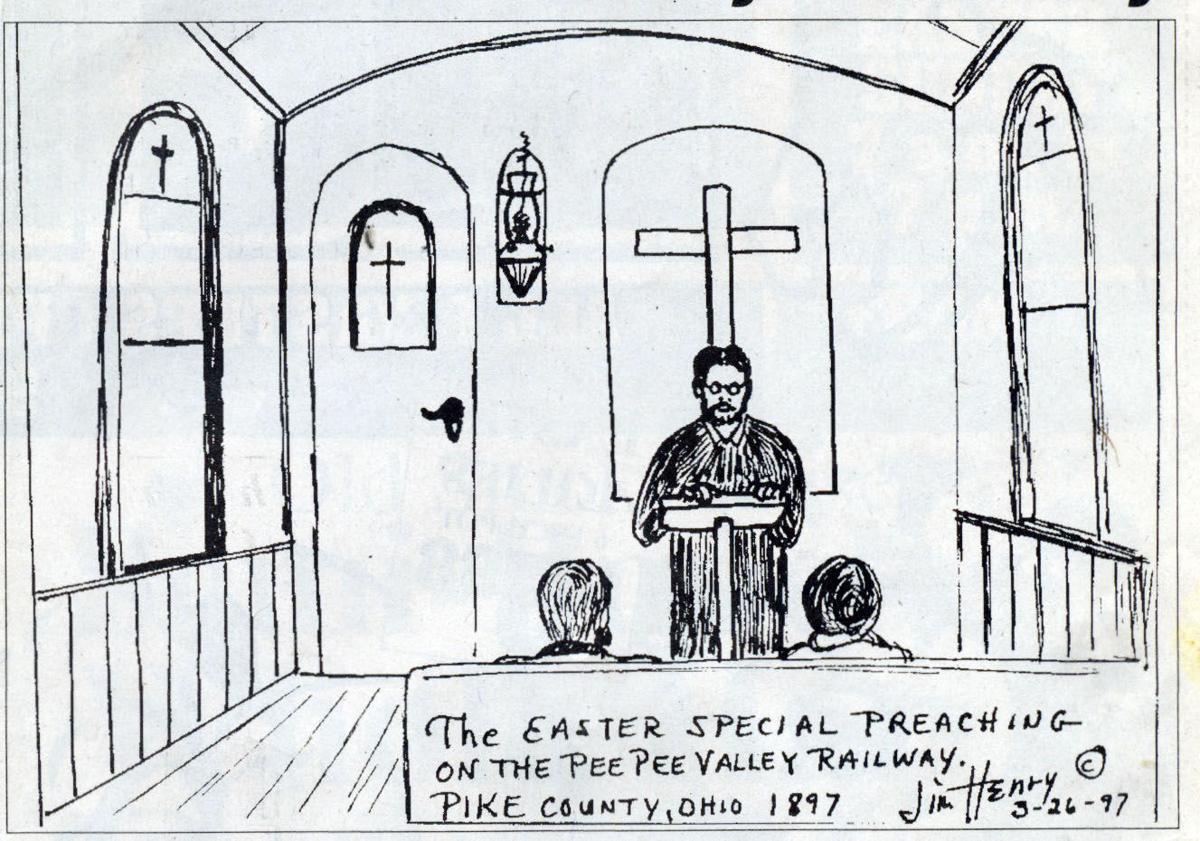 Some of the original article is shared here first in italics, followed by the paragraphs updating the information for 2020.

Thank goodness, spring has arrived — at least by the calendar date. And time for another story about that long forgotten Pee Pee Valley Railway.

Around 100 years ago, Easter fell at the last of March and officials of the PPV Railway decided to run a special church chapel car on the day before Easter. A chapel car was purchased from the Norfolk and Western Railway in Waverly that had been used on the Scioto Valley Railroad (purchased by the N&W Railway a few years ago). The car looked just like a church on the inside and was built by Barney & Smith Co. in Dayton, Ohio, railroad car builders.

The train was scheduled to leave Waverly at 7 a.m. on Saturday with a preacher from that village in charge and as the train came to another church in the valley, that pastor would board and preach a sermon.

The Easter Special was backed to the joint Ohio Southern-Pee Pee Valley depot on West North Street for boarding. Rev. Mason Dyke was the initial preacher there.

After tower operator Jack Dixon gave the signal to enter Pee Pee Valley Railroad at Pee Pee Junction, the train moved out west along the Ohio & Erie Canal as far as the Pee Pee Creek area and then followed the stream to Red Hollow School — junction of Sunfish Turnpike (now Ohio 220 and Ohio 552). Here the train stopped for Rev. Albert Reed and his son, Dale, and wife, Bev, before moving on to Dailyville.

At Dailyville church, Rev. Andrew Workman, the pastor here, boarded with visiting preachers — Floyd Estep and Carl Dunn — and the train moved past Rocky Fork Distillery before stopping at Dailyville station. Here the agent, Orval Arnett and family, had prepared a morning brunch of eggs, bacon and coffee or tea for the passengers. Everyone aboard was invited to the depot for a break as they served the delicious food. The ham (bacon) was top grade from hogs raised by Mike Cool of Cool Farms nearby.

After a 30-minute stop the train moved on up the valley to stop at Pee Pee Grocery, formerly Jim Pfeifer’s and to listen to good gospel music by Tom Hatfield and friends. Here Lin Gray, former pastor of Cline’s Chapel, boarded.

Next stop, Pleasant Hill Junction, and a water stop for the thirsty little locomotive. Bob Hughes handles the chores here, coming from a long line of railroad farmers.

On up the valley about a mile is Buchanan Junction, where the rail splits — left fork to Buchanan and Rev. Phyliss Lemaster climbs on for the trip on to Nipgen. Bill Cool is the operator at this spot.

A short ways up the valley, the branch to Summit Hill enters on the right — a very steep grade, too, but for now the train travels westward to “Possom Trot,” the old name for Nipgen. Upon arriving here, Rev. Melvin Husted preaches about the resurrection of Jesus before the train turns on the Wye.

Then down the creek to Turkey Run and now for a slow climb out of the valley.

The train passes Turkey Run School taught by Mr. Rose, past the Gladstone Mill, the scenic falls of Ernest Looney, the blacksmith shop of Mervin Pierce and to Summit Hill and a junction with the Ohio Southern Railroad. The Lowrey family reigns here with Jim, the Maintenance of the Way boss, Paul and his dad, George, agents and operators, as well as George’s wife, an operator. Paul’s brother, Jeff, is an engineer through here, too. Other engineers are Harold Finney and John Greenwalt. Coleman Kearns of Jackson also runs a train by here once in a while.

The preacher here is Woodrow Trainer, also a railroad trackman on this line. Woody gets aboard to travel back to Waverly by this shortline.

After a picnic in the grove and good gospel music by a band from Spargursville, the Special departs for home in Waverly. The patrons of this church-oriented run have enjoyed a blessing of much word from the Bible and are prepared for Easter the next day.

Then I woke up and realized I’d been dreaming and April Fools’ Day comes just five days away. But wouldn’t this train be a blessing for us? All the people I mentioned are actual persons; some have passed on.

Since that year (1997), Rev. Albert Reed has passed, but his son Dale is a pastor now in Waverly. Rev. Andrew Workman and Rev. Floyd Estep, who were past pastors of Dailyville have also passed. But Carl Dunn was the pastor here for many years and now his son, Peter, is the present pastor.

Rocky Fork Distillery was owned and operated by a nephew of James Emmitt and closed in 1907. The building was converted to a home. In 2014, the structure was demolished.

Tom Hatfield still has a gospel band “Fishers of Men” and still lives in the late Jim Pfeifer home.

Rev. Phyliss Lemaster was a Methodist pastor of several churches and has passed on.

Rev. Melvin Husted was a friend of mine living on Ohio 772 near the Buchanan area.

I knew a Mr. Rose who had taught school at the Turkey Run one-room school building. After the school closed in the 1930s, he helped the farmers with his tractor and equipment.

Mervin Pierce, since passed on, ran a garage on Valley Road in Ross County and was my mechanic when I lived on Cline’s Chapel Road.

Jim Lowery was the first superintendent of the D.T. & I. Railroad when built in 1877. His son George and wife worked at Summit Hill depot. Their son Paul was an agent at Waverly and their son Jeff retired as an engineer on the D.T. & I. Railroad. Harold Finney and John Greenwalt of Waverly were also locomotive engineers as was Coleman Kearns of Jackson. All three have gone on but I considered Paul, Harold and Coleman as friends, as was the late Woodrow Trainer, a preacher.

This is dedicated to the family of the late Russ Hubbard, retired Norfolk Southern Railway.