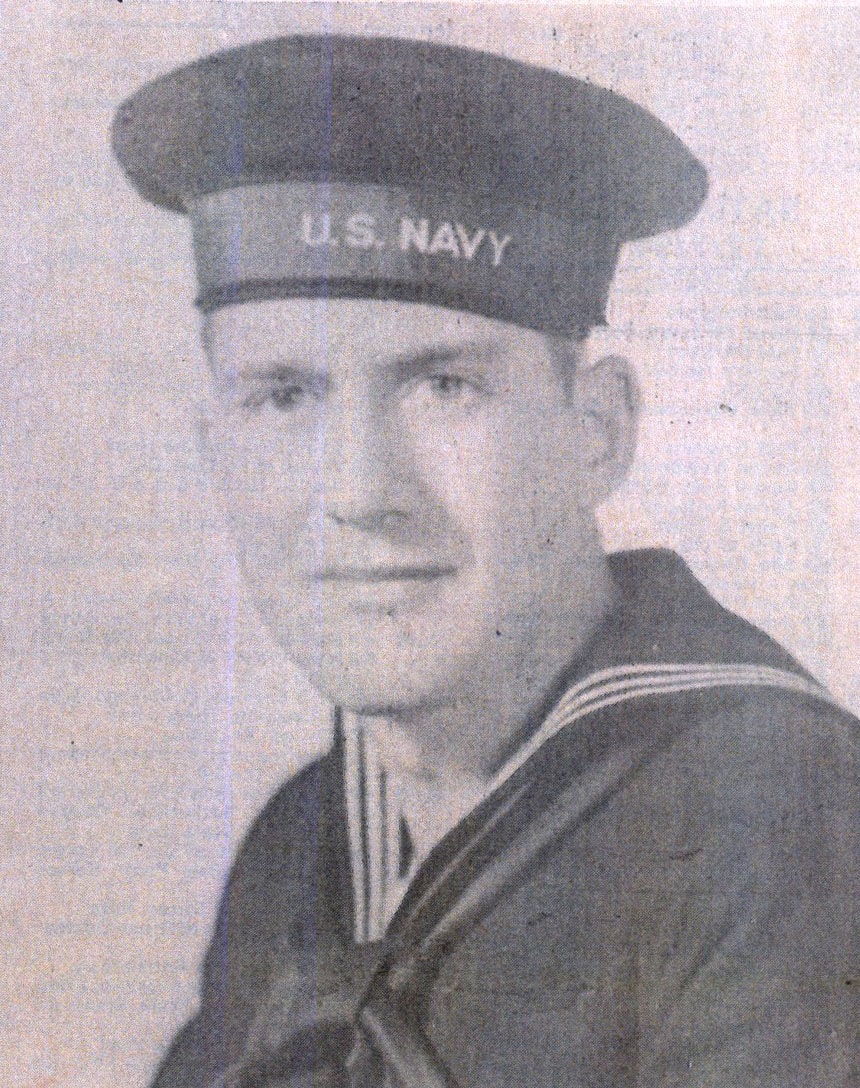 Pictured is Lester Helmick of Waverly, a Pearl Harbor survivor. The picture was taken when he was stationed aboard the Aircraft Carrier Saratoga in May, 1942.

Pictured is Lester Helmick of Waverly, a Pearl Harbor survivor. The picture was taken when he was stationed aboard the Aircraft Carrier Saratoga in May, 1942.

“Japan declared war on the United States Sunday after a deadly assault on Honolulu and Pearl Harbor in a series of surprise attacks against American possessions throughout the Pacific.”

(Note: All the facts weren’t presented in this short article. In fact, were much understated but may be on purpose to misinform the enemy).

“Up to 350 U.S. soldiers and workers and 300 injured at Hickam Field, Hawaiian Islands. U.S. Battleship Oklahoma set afire and two other U.S. Ships at Pearl Harbor attacked. Capture of U.S. Pacific Isle of Wake and bombing of Guam.

Torpedoing of a lumber-laden U.S. Army transport between Hawaii and San Francisco. Bombing of Philippine Islands. Seizure of International Settlement of Shanghai and destruction of British gunboat Petrel nearby.”

“U.S. Representative Jacob E. Davis of Waverly, member of the House of Foreign Affairs Committee, cut short his week end holiday at home to leave Sunday night for Washington to present for the extraordinary session of Congress which was held on Monday.

The congressman, representing the Sixth Ohio District, which includes Pike County, took a train (B & O RR) from Chillicothe at 8:20 p.m.

House Speaker Sam Rayburn called Congressman Davis at his home in Waverly about 5 p.m. Sunday to notify him of the impending extraordinary session.

The congressman arrived home Saturday morning and Sunday, he and his wife and two children, had dinner with his parents, Mr. and Mrs. George Davis of Beaver.

Local Sheriff issues orders. Asks for law obeyance in Pike County. Now is no time for violators. We, at home, must back our boys in uniform to the very limit.

Sheriff Robert E. Mercer issued a statement to the public, seeking stricter enforcement of the law during the present national crisis and asking the cooperation of the public in securing enforcement.”

To bring this Dec. 7, 1941 event to closer perspective, I answered the call of Lester Helmick of Seventh Street in Waverly to drop by and discuss his first-hand account.

I’ve known Lester and his wife, Polly, their son, David, and family for several years but didn’t know Lester was at Pearl Harbor when the Japanese planes came for a visit.

Lester is from Pickens, W.Va., and volunteered for the U.S. Navy in September, 1940. He took his boot camp training (basic) at Norfolk, Va. He then reported for duty aboard the battlewagon U.S.S. California in Washington state.

By the morning of Dec. 7, 1941, a clear sunny, warm Sunday, Lester was a third class electrician petty officer aboard the California. This ship was huge: 600-feet-long and many stories (decks) high.

At around 0745 when the bombing began, Lester was in his living compartment (where the racks or beds were) making change for a shipmate. They heard the general quarters alarm sound. Lester stuck his billfold in his locker and took off for his GQ station in the main control room. This is the central control for power and propulsion of the ship and was about 30 feet below the main deck.

While in main control, he and about a dozen other men received the word to “stand by.” Then they felt the ship move violently sideways twice. This was the effect of two torpedoes striking the side of the ship which was moored off Ford Island where all the battleships were always kept.

Finally, the power went off from the damage and the men were ordered out and to abandon ship by jumping overboard. Some men did but were burned by the oil burning atop the water. Most of the crew stayed board and helped put the fires out, attended to wounded and restore power.

By this time, the smoke was thick all around that little could be seen of the surrounding ships. The U.S.S. California was moored alone but some had other ships alongside.

The ship started listing badly, but damage control crews brought the ship level by turning the right valves to bring water into the ballast tanks.

The crew was transferred to Ford Island’s aircraft hanger nearby by small boats for the first night. The next day they went back for clean-up and Lester found his billford with a cut-damage from a torpedo hit. He still has the reminder.

In a few days, Lester was transferred to Carrier Saratoga and headed for Wake Island with a load of Marine aircraft aboard (in a convoy) to relieve the U.S. base under siege by the Japanese. Just when they were insight of the island, word was received of the U.S. surrender.

The convoy was then diverted to Midway and the sea battle then started turning the tide in favor of the U.S. and Allied forces.

I could relate a lot more of Lester’s adventures in the Navy until his discharge in August, 1946, but News Watchman Staff Writer Mark Richard will cover this from another perspective.

Lester Helmick was among the 250 Ohioans to receive the new Pearl Harbor Commemorative Medal (established by Congress in 1990) on Nov. 16, 1991 at Veterans Memorial building in Columbus. Some survivors were missed as Lester knows Everett Paul Bowman of Waverly, who witnessed the attack at Schofield Barracks as a soldier.

Of the 97 ships in Pearl Harbor that morning, 18 were sunk or damaged. The U.S.S. California was repaired and back in service for the rest of the war.

Of the 2,117 Navy men and Marines killed during the attack, more than half were lost when the battleship Arizona went down. Today more than 1,100 men are entombed within her rusting hulk.

Dec. 7, 1991 is 50 years afterward and a memorial service is planned at Pearl Harbor.