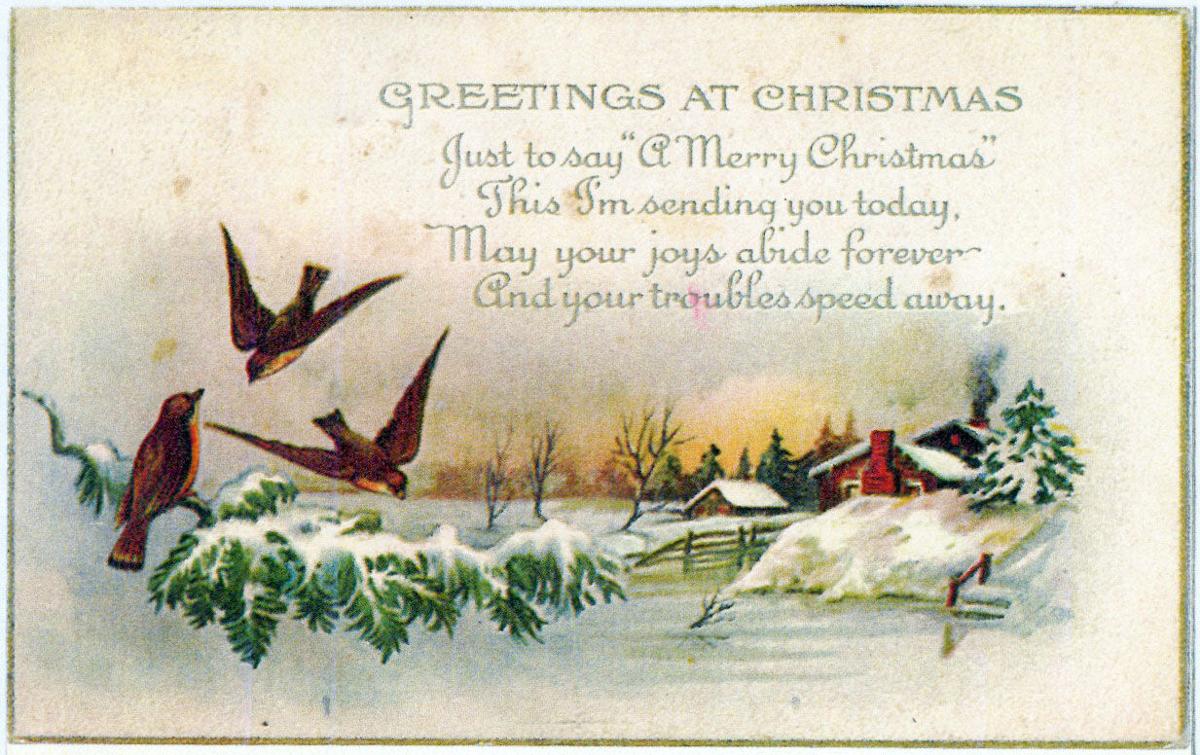 This year, Burl Mustard of Elm Grove sent me a poem. He wrote this recently and named it ”Christmas Past”, subtitled “Christmas in the Country; Elm Grove, Ohio, Pike Country. Living in the Tar Paper Shack.” He had two parents, nine brothers and three sisters.

Let’s have an old fashioned Christmas,

Life in the good old days, The table filled with lots of food and our Mom would silently pray

There was no live Christmas tree in the center of the room. But the glow from the Kerosene lamp, would brighten up the room, There never was any Christmas gifts, piled up on the floor, There was always food in our belly and peace in our hearts. Who could ask for more!

I was not granted leave for Christmas 1956; a sailor attached to my ship from Richmond, Va. said ‘Why don’t you go home with me for the holiday?’ I accepted Gerald Turner’s offer.

Gerald’s family treated me the same as a son. Gerald even took me with him on his date with his girlfriend to the first showing of Elvis’ first movie, “Love Me Tender.” I lost track of Gerald after we left the ship but will always have great memories of his and his family’s kindness.

The Portsmouth Railroad Show’s dates this year were changed to the same weekend as Jingle Bell weekend, so I missed the Saturday activities. I did enjoy Sunday’s music and cookies at Pike Heritage Museum. I met several old friends at the show including a cousin from near Batavia and Nelson Minter and his friend, Cheyenne, of Waverly.

The organizer of the Portsmouth Railroad Show for many years sold his Market Street Hardware Store and retired. His whole upper floor was devoted to model trains. Mark Harris told me there will be a show again next year. I’ll let you readers know if so.

Last month I was privileged to take part in a birthday party for Bud Hobday, 99 years old, at the Scioto Valley Model Railroad headquarters in Bristol Village. Their new museum is a class act and very well organized and easy to read and enjoy.

While thinking of past Christmases while growing up, I remember two especially. In 1944 Dad was in the U.S. Navy in North Africa, Sicily, Italy and France before returning to the U.S. in Dec. 1945. Mom bought me a Marx brand windup train in 1944, and during our move to the farm of my grandparents near West Union in 1945, it was lost. But I really enjoyed the time there with my grandparents but glad that Dad came home in time for Christmas 1945. By this time I was in second grade in a small country school of three rooms. I think we only had five grades in that building with a hand pump outside for water and outdoor toilets.

Over the years, I attended five schools before attending Waverly High School in 1952.

The postcard I used with this article was sent to me by Jim Hale (who started me on this Pike’s Past career) in 1994. He is still living in Grove City and the editor of their historical newsletter. Grove City is assembling an old time village starting with a one-room school house and have added the B & O Railroad depot.

This is dedicated to all my church friends at Dailyville Free Will Baptist Church as we celebrate Christ’s birthday.