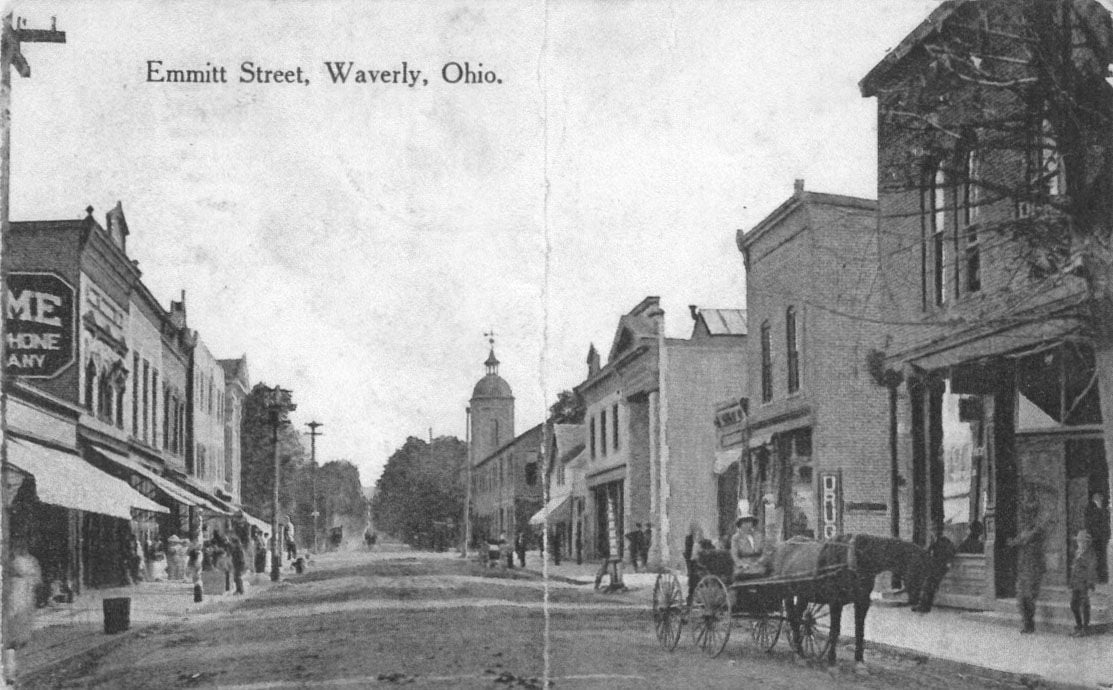 This postcard shows Market Street in Waverly around 1915.

This postcard shows Market Street in Waverly around 1915.

This week I delve into several years past as recorded in the latest newsletter from the Pike County Genealogy and Historical Society “Pike Speaks”, January 2020. The next meeting will take place in the Pike County Library room downstairs on Saturday, March 21, usually beginning at 11 a.m. Everyone is welcome.

From the Feb. 10, 1921 newspaper Republican Herald is this obit. D.W. Mathews died at his home in Jeffersonville, Ohio. He was a veteran of the U.S. Civil War and was active for years in the G.A.R. (Grand Army Republic) veterans of the Union army, while a resident of Pike County. He formerly resided in the Pleasant Hill area where he was highly respected.

From the August 27, 1903 issue of Courier Watchman newspaper comes this death notice. M.A. Startton, an old and well known citizen of our town (Waverly) died at his home on Third Street, aged about 75 years. He was born in Richmondale, Ross County, but had lived here a great many years and was respected by everybody. He was a soldier in the War of Rebellion (another name for our Civil War 1861-1865). He leaves two daughters and two sons.

From the June 25, 1903 issue of the Courier-Watchman ... A pleasant wedding took place last night in the church (what one?) between Miss Mary A. Steinhour, daughter of Mr. and Mrs. Charles Steinhour, and Mr. John Haller of Chillicothe. Rev. Matheny of Piketon officiated. Miss Alma Hasto, Addie Hoffman and Fanny Hutt attended from here and the Watchman tenders its best wishes.

From the Aug. 6, 1903 Courier Watchman is this item. Uncle Noole Boiler recently walked from his home to Piketon and back again a distance of two miles (note: must not be of Waverly for that would be several more miles). Despite his 88 years of age, he is a spry and youthful as a man of 70.

Also, in the same issue is this item: Piketon. Wiley Dunham, a former Piketon boy who has been playing several major and minor leagues this season, was released by Memphis some time ago and at present writing has not been able to sign with any other. Note: he did for years.

This scene is of Market Street in Waverly about 1915, according to the postmark on the postcard. This is looking south from the Emmitt House area.