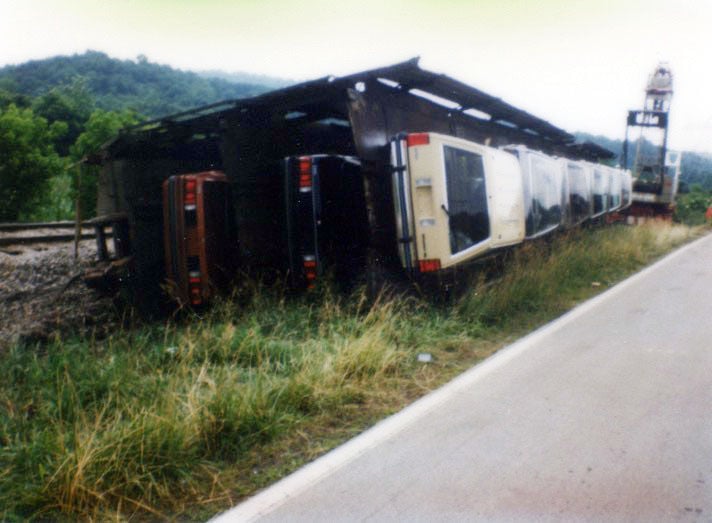 This photo, taken July 2, 1981, shows a D.T. & I. Railroad train derailment along Ohio 41 north of Bainbridge. It was taken by Harold Finney.

This photo, taken July 2, 1981, shows a D.T. & I. Railroad train derailment along Ohio 41 north of Bainbridge. It was taken by Harold Finney.

Dallas Johnson, one of my best neighbors, has since passed away. His son Roger lives in the same house across the road (Ohio 220) from me at Dailyville. Dallas’ son, Roger, owns the property where the Roy and Tillie Dixon farm did set, but had the old house torn down in March 2014.

Since 1987, no D.T. & I.-GT trains have run into Waverly, as the rails were removed from Greggs (the connection with the C & O Railway, now CSX). Then the rails to Jackson through Givens and Beaver were taken up.

The photo shows an auto carrier derailed along Ohio 41 north of Bainbridge. This was taken by the late D.T. & I Railroad engineer Harold Finney, July 2, 1981.

This is dedicated to the Dallas Johnson family.

While talking to my neighbor, Dallas Johnson recently, he related some of his experiences working for the D.T. & I, and cleaning up wrecks and derailments.

He also remembered hearing about an incident that happened several years ago in a small community, which will remain nameless. A fellow had a wife who was very overweight. When she came out of the local store, her husband had brought his car right up alongside the store step. She stepped in and closed the door. When the husband started to pull away, the car never moved, even though the drive wheels were spinning. Three bystanders noticed the car leaned toward the store and was stuck upon the step. So the three said, “We’ll help you,” and lifted the low side and pushed until the car moved forward. Dallas told me one of those three still lives in Pike County but I won’t mention any names.

Back to the D.T. & I. Railroad and Dallas’ part in the cleanup ... Dallas had trucks and bulldozers for years in his business.

Dallis has built ponds, basements, septic systems and many other construction projects. He has used his bulldozer and front-end/backhoe machines to clean my driveway of snow many winters plus other projects around our place.

Dallas owns the former James Roy and Tillie Dixon farm in Dailyville including their old home, the former Rocky Fork Distillery, but he built a nice brick ranch house in the bottoms next to Pee Pee Creek.

D.T. & I. employees Bill and Story Cool were old friends of Dallas and when the road master (in charge of restoring track and cleaning up derailments) learned Dallas had equipment which was suitable for that work, he was hired as needed. Some of the derailments including the one of Spargursville store of a coal train in the winter, another on Minnehan Bend (the middle horseshoe curve) on the climb to Summit from Storms Station. This wreckage included a refrigeration car with beer and strawberries.

A lot of those items and shelled corn in another car disappeared before officers of the Ohio National Guard arrived. Then D.T. & I. railroad employees brought a truck to transport the beer to a safe place in Bainbridge. A lot of derailments came after those long cars were used such as car (auto) carriers couldn’t negotiate the sharp curves. Then the track crews and engineering gangs rebuilt the sharp curves somewhat wider but still not enough to stop all derailments.

In 1982, Grand Trunk Railroad, owners of the D.T. & I. since 1979, obtained trackage rights from Chessie System to run trains from Washington Court House through Chillicothe down the old C & O Railway to Greggs junction east of Waverly and back onto D.T. & I rails to Waverly. The rails between Ohio 220 (West North Street) in Waverly to Greenfield were removed by June 1983. This is dedicated to Dallas Johnson and family — my good neighbors. The photos and auto carrier rail car derailed north of Bainbridge July 2, 1981. The photo was taken by Harold Finney.