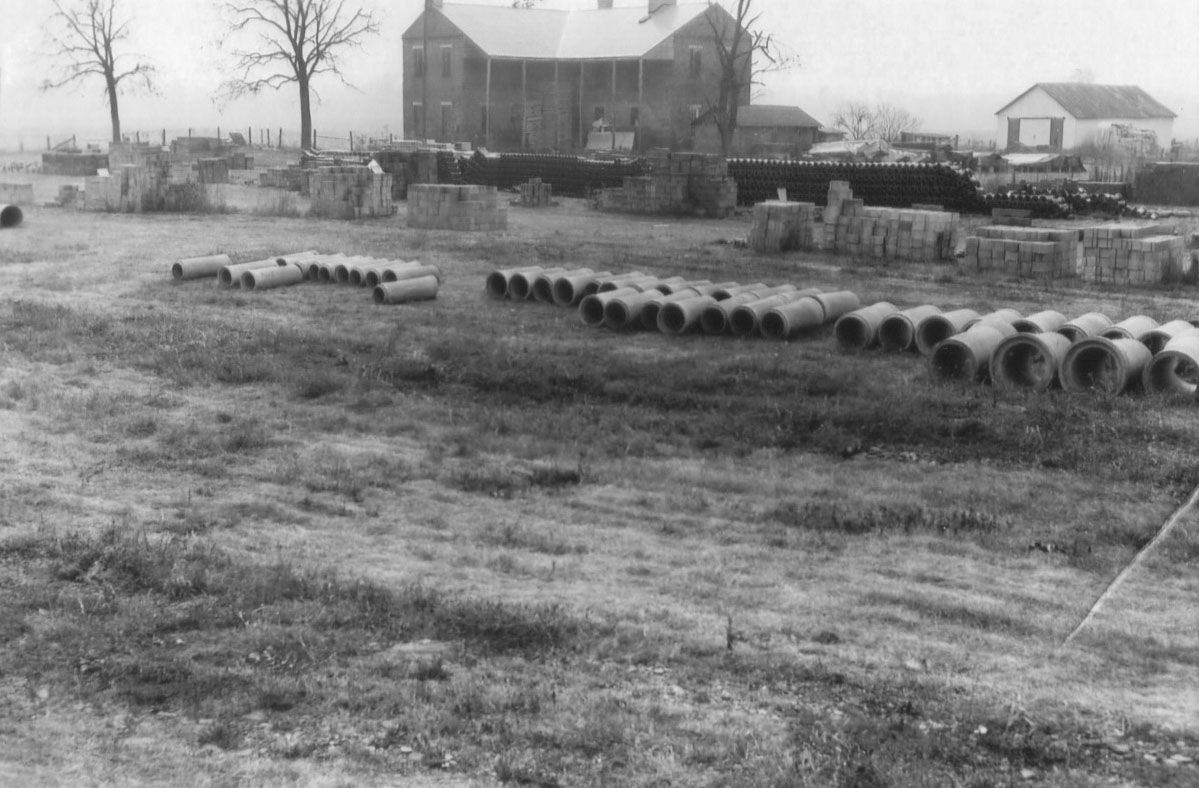 This is the former Judge Hibbens home, which was torn down for the construction of Mill’s Pride, a southern Ohio cabinet factory. The home was located across from the Tollgate bar building. The house stood when other factories were built, as Thompson Auto Parts, Van-Rob/Kirchhoff are there now. The current owner and restoration manager of the Tollgate building is Bryan Bodager.

This is the former Judge Hibbens home, which was torn down for the construction of Mill’s Pride, a southern Ohio cabinet factory. The home was located across from the Tollgate bar building. The house stood when other factories were built, as Thompson Auto Parts, Van-Rob/Kirchhoff are there now. The current owner and restoration manager of the Tollgate building is Bryan Bodager.

In 1839, work on the Portsmouth-Columbus Turnpike, South began. Portsmouth and Scioto County were already at work. Ross County which faced the huge task of crossing Divide Hill had also started.

In Pike County the turnpike committee’s task would be the upgrading of the old Chillicothe Road. The challenge would be to bring the road’s deeply-rutted dirt surface to a level that would be passable in inclement weather. The Chillicothe Road had never approached that standard. The original 1830 turnpike plan had called for a macadamized road built of limestone. The cost would be prohibitive. Bill Renick, brother of Felix Renick, the Portsmouth-Columbus Turnpike Chairman, came up with an alternate plan. Instead of limestone, the road would be constructed of gravel. The gravel would be put down in four to six-inch layers and then rolled and packed. In another six months, or so, a second similar layer would be worked in. Gravel was much cheaper.

The gravel idea worked especially well in Pike County. Gravel deposits were available along the entire 16-mile route. The turnpike would follow Scioto Township at the south edge of the county through Piketon to the plateaus north of Waverly before dropping into Ross County.

The work in Pike County started with the main street in Piketon. The turnpike was 20 feet wide as it passed through the county seat widening to 30 feet in open countryside. A general contractor was hired to plan and direct the road construction.

The Pike County turnpike committee looked for ways to stretch their funds. The group received a credit for the existing bridge across the canal in Waverly. Property owners along the turnpike often waived right-of-way fees.

Local residents hustled to find work on the construction. Timber often had to be cut out at the right-of-ways. Horses and wagons were hired out. Much of the work was done by hand and men could hire on to use shovels and wheelbarrows.

The contractor brought men from outside the county who often stayed with families along the route. These men often would bring firewood from right-of-way clearings to supplement their rental payments.

Road construction started in Pike County in 1841 and continued for the next two years. In 1843, the County Commissioners appointed Benjamin Daniels, David Miller and Phoebus Brown to assess any damages “occasioned by the Portsmouth-Columbus Turnpike passing through land lying along said road in Pike County.” Upon the conclusion of their study the road was judged to be ready for public use.

The 1837 Turnpike Law changed the rules for tollgates. The original law had called for a tollgate every 10 miles. The later law provided for one tollgate in each county with no restriction on the exact location. James Hibbens agreed to build the tollgate in Pike County at his expense on the property he owned at the south end of Waverly. The building was constructed of brick and was ready when the turnpike was finally completed in 1843. The tollgate would remain as Hibbens property.

The Portsmouth-Columbus Turnpike immediately increased traffic through Pike County. Freight wagons could now travel more quickly and more consistently over the improved surface. The Portsmouth-Columbus Stage Line ran seven days a week hauling both passengers and mail. People who lived along the new road felt less isolated. Family-owned groceries opened along the turnpike. Farmers could more easily get their crops and livestock to market.

Members of the Pike County Turnpike Committee did not see a profit. The finished road required maintenance. People found ways to bypass the tollhouse in Waverly. James Emmitt reported that stockholders did not receive a dividend in the first 20 years of operation.

James Emmitt became President of the Portsmouth-Columbus Turnpike, South in the late 1860s. Within the next two decades the Commissioners in Scioto and Ross counties bought out the shareholders in their counties. Both counties then made the roads toll-free.

Emmitt gradually bought out most of the Pike County shareholders, many of whom had lost confidence that the turnpike would ever make money. Emmitt was reluctant to admit that the road had very little profit possibilities. Finally, in March 1892, he agreed to sell the 16 ¾ miles of turnpike in Pike County to the Commissioners for $11,250. There was one exception. The tollhouse was not included.

James R. Hibbens had maintained the toll house as his property. The years following the opening of the turnpike in the 1840s were challenging for Hibbens. He pursued his retail business and partnered to build a four-story woolen mill in Waverly. Hibbens ultimately concentrated his activities to managing his 166 acres of farmland.

In 1850, Hibbens was elected as an Associate Justice of the local circuit court. From that time, he was always referred to as Judge Hibbens. The title was always used as a show of respect for Hibbens. The Judge passed away in 1879 at the age of 81.

The tollhouse and the farm acreage remained in the family until it was sold in January 1925. Over the last 95 years, the toll house has changed hands several times. A listing in the Pike County Clerk of Courts’ Office named it as a residence, then a small grocery in 1954 and a series of public taverns from the 1960s into the 21st century.

With 180 years of Pike County history within its walls, the Toll Gate renovations open speculation about the next two centuries.